The imposing fortress was built to protect the city from enemies that were approaching by land, serving as a counterpart to the Castle San Felipe del Morro.

The fortification covers more than 27 acres and is the largest made by the Spanish in the New World. Fort San Cristóbal defended San Juan Bay from foreign attacks, such as the Battle of San Juan in 1797, perpetrated by Ralph Abercromby.  The fort served as a means of defense for the city of San Juan in case of ground attacks from the east.

The structure was built over a period of 150 years and has three levels and multiple exterior defenses. The chief engineer of the project was the Irishman Tomás O’Daly with the assistance of Juan Francisco Mestre.

The fortification was named after San Cristóbal, the patron saint of land travelers, and was considered a necessary addition to San Juan’s defenses after devastating attacks by the English in 1598 and the Dutch in 1625. 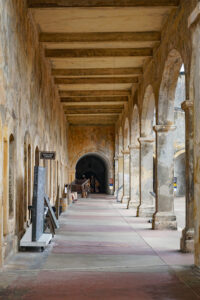 Visitors are fascinated with all the aspects of the Old World that you will find in the surroundings such as: secret tunnels, dungeons for prisoners, cannons to defend the castle, spiral staircases that interconnect floors and its fortified walls.

Visitors have the opportunity to walk through tunnels and gain additional information about this important fortification. The structure stands as an imposing and impressive example of 18th century innovation in military engineering.

A section of the fort is within walking distance of the San Juan Capitol building and the Teatro Tapia y Rivera, a famous and historic theater. San Cristóbal, as it is commonly called, offers spectacular views, impressive architecture, and its own unique visitor experience.

Castillo San Cristóbal was declared a World Heritage Site in 1983 by the United Nations “UNESCO”. The San Juan National Historic Site has been administered, since 1949, by the National Park Service, Department of the Interior.

Your visit to Fort San Cristóbal

Fort San Cristóbal has two entrances, the Historic Entrance at the top of the hill in Norzagaray and the Main Entrance at the eastern end of Norzagaray. Visitors can take a self-guided tour, brochures are available to browse with posters throughout the exhibits and fortress grounds.

There are three levels in the fortress:

As you walk through San Cristóbal, you can go through cannon loopholes, enter sentry boxes “garitas”, navigate tunnels, and observe exhibits from former military barracks. Be sure to check out the infamous “Devil’s Garita”, legend has it of soldiers who mysteriously disappeared.

The fort is open every day from 9:00 am to 6:00 pm, except Thanksgiving, Christmas and New Years. The entrance has a cost of $ 3 for people over 16 years old, people under 16 years old enter free

During the 16th to 18th centuries, the Spanish built countless fortresses in the Caribbean and South America. The largest was Fort San Cristóbal (Castillo San Cristóbal). This formidable defense spanned 27 acres of Old San Juan. Fort San Cristóbal was built from 1765 to 1783, a remarkably short time for such a large fortification. 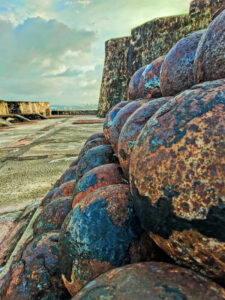 With its design inspired by 17th century French Vauban-style fortresses, the fort’s notable features include a dungeon, moat, plaza, canons’ rooms, several tunnels, and a bunker, with two observation posts added during World Wart II. In addition, rainwater was collected, which these cisterns are used today. The cisterns retain 800,000 gallons of water that are used to irrigate the surrounding green areas and are proof that self-sufficiency has existed for centuries.

The Fort San Cristóbal underground tunnel network is open to exploration; the complex labyrinth was originally used to facilitate communication, transport military materials, and add a level of difficulty for attackers. The tunnels were completed in 1780 and were built to provide visual handicaps for attackers through the configuration of the tunnels and the darkness of the surroundings.

The city faced battle twice. The first was in 1797 when a British attack was repelled. The second was 101 years later, when its cannons fired at the USS Yale. This unfortunate move involved Puerto Rico in the Spanish-American War. Before the end of the year, Spain ceded Puerto Rico to the United States in the Treaty of Paris. Today you can see the three flags which represent the United States, Puerto Rico and the Spanish Empire.

Be sure to visit this San Juan National Historic Site. The fort is also designated as a World Heritage Site by the United Nations “UNESCO”.