Caverns of the Camuy River National Park is one of the most spectacular places in Puerto Rico. It is the third largest underground river and cave system in the world where 18 entrances have been discovered so far.  The Río Camuy Caverns are part of one of the most dramatic and massive cave systems in the Western Hemisphere.

So far, more than 10 miles of caverns, 220 caves and 17 entrances have been mapped in this Camuy cave system. This is just a fraction of the entire system that many experts believe still contains another 800 caves.

The Park is located between the municipalities of Camuy, Hatillo and Lares in northwestern Puerto Rico, but the main entrance to the park is in Quebrada, Camuy.

This 268-acre underground treasure is part of a large network of natural limestone caves and underground waterways carved out by the world’s third-largest underground river, the Rio Camuy.

The Caverns of the Camuy River National Park  is one of the most popular natural attractions in Puerto Rico, visited by more than 150 thousand people a year and with a carrying capacity of 1,300 users. The waters of this important river have led to the expansion of this marvelous work of approximately 45 million years, which rivals the most important cave systems in the world for its extension. 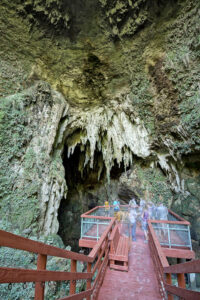 The Caverns of the Camuy River National Park offers tours (tours) on a first-come, first-served basis and a fee is charged. The park has a wooded area with picnic pavilions, a play area for children, walking trails, a small restaurant, and a souvenir shop (sourvenirs). Audio guide recordings are available in both English and Spanish.

Upon arrival you will begin your journey with a video and then a trolley will take you to the entrance of the main cave, Cueva Clara, which is more than 170 feet high and has immense stalagmites and stalactites. During the tour, the park guides will inform you about the cavern’s ecosystem in a jovial and friendly way. Finally, the trolley will stop at the Tres Pueblos Sumidero, an impressive depression, where at the end you will see the Río de Camuy.

The park is open Wednesday through Sunday from 8:30 a.m. at 3:45 p.m. and it is closed on: New Year, Three Kings Day, Good Friday, Thanksgiving and Christmas. Tickets are $ 18 for adults, $ 13 for kids ages 4-12, and seniors get a discount, kids under 4 are free. All prices include an audio guide for your traveling pleasure. Parking costs $ 3 to $ 4 depending on your vehicle. Camping is allowed in the summer (June 15-August 15) for $ 5 per person. Call ahead for information is recommended.

“Cueva Clara de Empalme” or Clara Cave is the main attraction of the Park. In this cave, you can appreciate a true spectacle of subterranean sights such as towering ceilings of crystalline stalactites, hundreds of stalagmite mushrooms on the floor, impressive rock formations and stone tapestries created by Mother Nature. 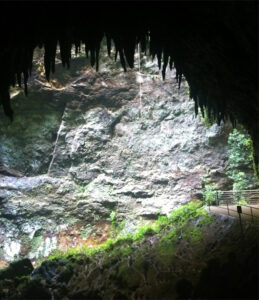 Tours begin with the screening of a short film in a 90-seat theater, explaining the Río Camuy cave system and site safety rules, followed by a train ride that takes visitors to the entrance of the Clara cave.

The huge chamber is 212 m (700 ft) long and 65 m (215 ft) high. Once inside this chamber, visitors can see an entrance from the roof of the “Empalme Sumidero” that is 60 meters from the surface, as well as stalactites, stalagmites, unique formations and thousands of bats.

To be able to enter and see the mouth of Cueva Clara, and reach “Sumidero y Cueva Espiral”, visitors must be in good physical condition. You have to go down to it through a picturesque 205-step promenade. The challenge is to get back on the tram. Once you go down the 205 steps to the sinkhole, the cave itself is out of reach. Only experienced cavers can penetrate the cave and underground river with a special permit from the Puerto Rico National Parks Company.

Tri-Towns Sinkhole or “Sumidero Tres Pueblos” is a giant sinkhole that is 650 feet (195 m) wide. The Camuy River can be seen 400 feet (120 m) lower from three observation decks that are located at different points along the opening of the impressive crater.

The sinkhole is located where the limits of the towns of Camuy, Hatillo and Lares converge. Each town has its own platform overlooking the sinkhole.

The only restrooms are in the waiting area. The tour lasts approximately 1.5 hours. You can take all the photos you want. The guides will show you the best ways and places to get good pictures.

How to get there:

Driving from San Juan is approximately 1 hour and 20 minutes. Camuy River Cave Park is located on Highway 129 Km. 18.9 from Arecibo to Lares. To get there from PR22, take Exit 77B that connects with Highway 129 towards Lares.