Old San Juan is the name by which the historic district of San Juan, Puerto Rico is known. It is located on the Islet of San Juan which is connected to the main island of Puerto Rico by bridges. The city is characterized by its cobblestone streets and colorful buildings that date back to the sixteenth and seventeenth centuries, when the island was Spanish. The district is also characterized by the large number of public squares and churches, including the Metropolitan Cathedral of San Juan, which houses the tomb of the Spanish explorer Juan Ponce de León. 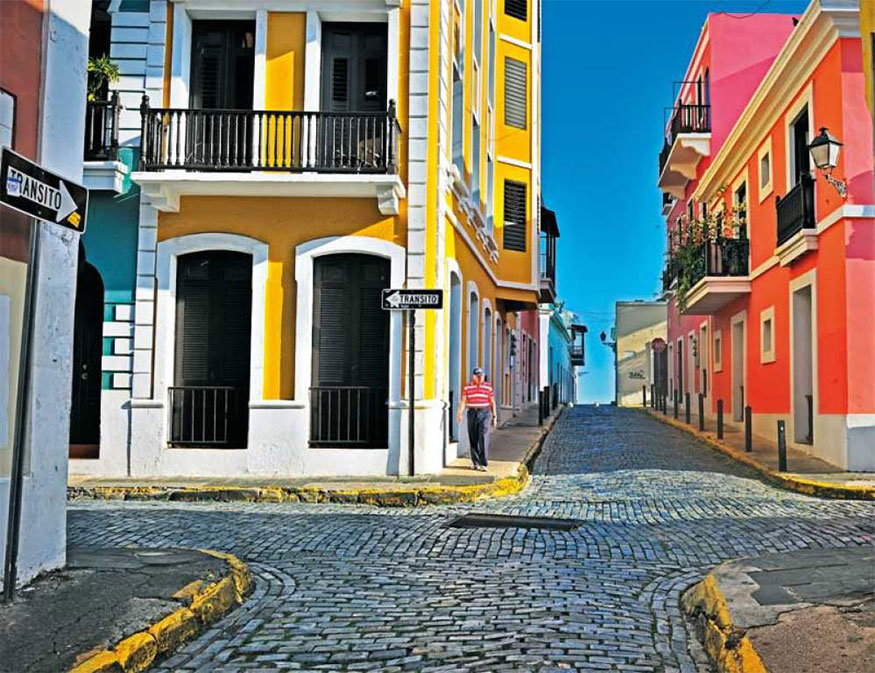 The city is characterized by its cobblestone streets and colorful buildings dating back to the sixteenth and seventeenth centuries, when the island was Spanish. The historic district is also characterized by the large number of plazas and public churches, including the Metropolitan Cathedral of San Juan, which houses the tomb of the Spanish explorer Juan Ponce de León. With the abundance of shops, historical places, museums, restaurants, its ancient beauty and architectural peculiarity, Old San Juan is one of the touristic axes of the island.

Old San Juan is the most conserved city of America since the XV century, where you can see the true lifestyle and architecture made by the Spaniards of those times. Old San Juan transports you to a provincial era in the 21st century.

Today Old San Juan is a very busy center for tourism. San Juan is the main Caribbean cruise port and hosts more than 28 cruise lines, attracting millions of tourists to the city each year. You can tour the entire city that is 465 years old on foot. The El Morro and San Cristóbal forts are open for tourists, just as many of the houses and buildings of the 16th and 17th centuries have been restored to their splendor with their original architecture which now houses several museums full of fascinating stories and artifacts that tell the history of this ancient city.

Attractions – Places to Visit in Old San Juan and Nearby Areas

San Juan Bay is the busiest maritime port in the Caribbean, attracting half of the region’s trade and more than one million cruise visitors per year. The beauty and ecological diversity of San Juan Bay attracts tourism and a variety of recreational activities. The stores in Bahia de San Juan carry everything from gold jewelry to arts and crafts on the island.

Built in 1635, it is the oldest entrance gate and the one that has existed since then. San Juan was a city enclosed by five doors, including the “La Puerta de San Juan”, which was the main gate of the city. As you approach the door, you will see the inscription “Benedictus qui venit in nomine Domini” Blessings to all who come in the name of the Lord.

The city wall of San Juan is one of the most valuable historical monuments and one of the most popular tourist attractions in Puerto Rico. Built for the purpose of protecting the city from enemy attacks. Its construction began in 1634 and its masonry walls 20 feet thick were completed in 1782. From here, you can see across the bay the “Isla de Cabras” and a small Spanish fort “Fortín San Juan de la Cruz”.

The largest fort ever built by Spain in the New World. The imposing “Castillo San Cristóbal” was completed in 1785. Its intention was to protect against the invasion of the land, so it was ingeniously designed according to a model of “defense in depth” that created numerous successful barriers against the advance of enemy forces. In 1983, the site was recognized as a World Heritage Site by UNESCO.

Located on the northwest tip of old San Juan, the San Felipe del Moro Castle was built by order of King Carlos V of Spain. Construction began in 1539 and for 400 years additions were added to keep up with military technology. During the First and Second World War, the US Army occupied the fortress until 1961. In 1983, the fortress was named a World Heritage Site by the UN

The Fortress was built at the beginning of 1500 as the first fortification in the port of San Juan. Built to defend against the invaders, the fort was only conquered twice, once by the British in 1533 and once by the Dutch. Today the fortress is the residence and work offices of the governor of Puerto Rico and is the oldest mansion in executive functioning in the Western Hemisphere. While the fortress is still a functional building, excursions are offered where you can see examples of early Spanish architecture and ancient stone fortifications.

Condado Beach is a very popular beach among tourists in San Juan who crave an experience at a Caribbean beach resort with all the vibrant life of a city just steps away. County is often compared to the Miami Beach environment, cultural experiences, nearby beaches and world-class attractions make Condado Beach even more attractive, not to mention that the weather is warmer all year round.

The Capitol of Puerto Rico would have become the House of Representatives and the location of the seats of the senators. The building faces the Atlantic Ocean and has a somewhat intimidating design. With its spectacular architectural design and beautiful friezes and mosaics added as a final touch, the building of the Capital of Puerto Rico is an impressive feat of construction and decoration that instills respect and admiration in everyone who comes through its doors. There are two main entrances to the Capital Building of Puerto Rico; one entrance is to the south and the other to the north.

This is the “central” square that nominates the city, presented in the sixteenth century with the classic look of the squares of Madrid and Mexico. A highlight of the square is the City Hall, which dates from 1789 and has two turrets similar to those of its counterpart in Madrid. This building houses the mayor’s office and is the site of periodic exhibitions. Being one of the main squares in San Juan, the Plaza de Armas serves as a meeting point for both local residents and tourists. The square is dominated by an impressive round fountain, surrounded by four statues that personify the four seasons of the year.

Being in the Playita del Condado feels like a surprise when visiting the Condado district. When you cross the Puente Dos Hermanos bridge to the east along Avenue Avenue, you will find a small beach hidden in the northeast corner with soft golden sand in the shade of palm trees and almond trees. Although small, this beach is undoubtedly compensated with its clear and calm waters of aquamarine color. This beach is also a historical place. On the other side, you can enjoy the views of Fortin (Fort) San Gerónimo that contrast with the modern architecture of Plaza Caribe Hilton.

Things to Know Before You Go

How to Get to Old San Juan

Old San Juan is located on an islet, attached to the mainland of Puerto Rico by three bridges. If you’re coming from the mainland or the airport, book an airport transfer or drive over the bridges. Those arriving as Caribbean cruise ship passengers will likely dock at one of the many cruise ship piers in the neighborhood. Once in Old San Juan, getting around the area is easy by foot or taxi, and a free trolley system also runs through the area.