The City Of The Revolt

Lares (LAH-res) is known as the “the Town of The Grito”, “Capital of the Mountains” and the “Altar of the Fatherland”.

Lares is located in the west central region of the island. It is bordered to the north by the town of Camuy, on the south by Yauco and Maricao, on the west by San Sebastián and Las Marías and on the east by Hatillo, Adjuntas and Utuado.

Lares is known for growing coffee. Today, other agricultural products are also grown, including oranges, bananas and (hydroponic) tomatoes, as well as fruits such as plantains, and root vegetables such as yautia and ñame. Its economy is also based on manufacturing of leather products, clothing and shoes. Raising livestock is a secondary activity.

The municipality also has manganese deposits which are inactive today because of intense exploitation in the past. According to historian Mario Villar Roces, important deposits of copper have also been found in the earth of Lares.

The name Lares is derived from the Basque names “laris” or “lariz” determined by the presence in the region of don Amador Lariz, a colonizer of the sixteeth century that owned a ranch in the area. On April 26, 1827, Governor La Torre approved a request to separate Lares from San Sebastián. The first mayor was Juan Francisco de Sotomayor, one of the founders of the independence movement. Although the town was founded in 1827, the parochial record books do not begin until 1838.

During 1868, the independence movement began that gave standing to the town of Lares. During those days, the Spainish revolution that culminated with the dethronement of Isabel II offered hope to the independence movement of Cuba and Puerto Rico. On 14 September of that year, the local board of Lares celebrated a “Te Deum” asking God for help in the insurrection that would take place days later. 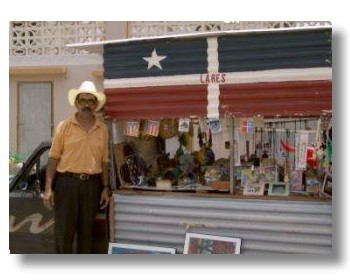 On September 23, 1868, 185 farmers commanded by Manuel Rojas undertook the battle. The first rebel vanguard group that entered the town was rejected by the militia. But the rebels eventually prevailed and marched to the plaza. For a moment it seemed that the rebels could maintain their positions, but not for long. Shortly after, a group of Spanish veteran troops arrived from Moca forcing the rebels to retreat. The insurrection lasted only 10 hours and with a toll of four dead, four injured and six or seven prisoners. The greatest toll had been paid by Betances. It took him twelve years to prepare for the insurrection and in ten hours it was finished. The day after the revolt, Spanish Headquarters began a tenacious persecution of the rebels and their possible sympathizers that extended all the way to San Juan and through half of the island.

In 1898, North American Army occupied Lares, first occupied by General Henry’s troops. Later General Henry ordered its troops to retreat to Utuado. A Spanish force was then sent from Arecibo to recapture Lares on September 21, 1898.

In 1946, the Puerto Rico Planification Board broadened the urban zone of of the City of Lares with parts of Barrio Pueblo and Barrio Lares (wards). This was the last change that the territorial organization experienced. At the time of its foundation, Lares counted 273 inhabitants.

It is bordered by: Camuy on the north, Yauco and Maricao on the south, San Sebastián and Las Marías on the west, and Hatillo and Utuado on the east.

People are known as: Lareños

Lares is also known as:

Lares is located in the Central Mountain range at 1,200 meters above sea level and its territory is mainly mountainous.

Its hydrographic system is made up of the following rivers and lakes:

On June 1868 Don Manuel Rojas presented to the Bravo Center of Lares the flag that Dr. Ramón Emeterio Betances had designed. Thus, the municipal flag of Lares is none other than the historical flag proposed by the patriarch Dr. Ramon Emeterio Betances for the Republic of Puerto Rico, and that has been named “Flag of Lares” due to the fact that it had been hoisted by the revolutionaries on September 23, 1868.

This flag is formed by a white Latin cross in the center. The width of the arms and base are equal to a third part of the latitude of the emblem. It has two quadrilaterals located above and two below the arms the cross. The superior (top) ones are blue and inferior (bottom) ones red. A five point white star is located in the center of the left superior (top) quadrilateral. This design served as model for Doña Mariana Bracetti in making the first flag of Lares. This flag became the symbol of the September 23, 1868, revolution. The revolution is well-known as the “Grito de Lares” (The Cry of Lares).

The honorable Municipal Assembly of Lares in 1952 approved a resolution proclaiming this flag the official flag of the Municipality of Lares. The flag’s symbols have the following meaning:

By authorization of the Institute of Culture, the Coat of Arms of Lares was adopted. It officially corresponds in its design and colors with those of the flag, adopted in 1952 by the Municipal Assembly under the administration of Mayor Ramón María Ramírez. The description of this Coat of Arms is as follows: a white cross is centered on and extends across the shield from side to side and top to bottom; it has blue top quadrants and red bottom quadrants; it has a five pointed white star in the upper left quadrant, the variant of which is in agreement with the best heraldic tradition. These figures, that in the flag are white, are represented in the shield in silver.

The chain that surrounds the shield is a talking soul that represents the name of the town of Lares in which the last name of the Spanish colonizers Rodrigo and Amador de Lares are perpetuated. The name “Lares” has its origin in the mountain range of the same name, in the province of Bajadoz, Kingdom of Extremadura, in Spain and is almost identical to the Llares language. Whereupon in certain parts of the mountains and in Asturias the chains are still used to hang the boilers in the home or chimney, a place of the house considered sacred by the Romans and dedicated in cults to the Lares gods, from which the Llares word is derived. The chain as an accessory to the shield, has a second meaning: to emphasize the object of the insurrection of Lares, to liberate Puerto Rico from the chains of colonialism.
The Coat of Arms as described has positioned around it on a scroll and a ribbon in a semicircle the words: “Lares Ciudad del Grito.” This constitutes the stamp of Lares and identifies unmistakably the municipality of Lares.

How to get to Lares from San Juan.