City of the Viví 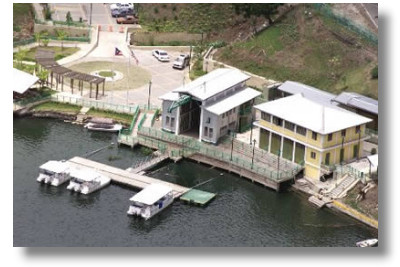 Utuado (oo-too-AH-do) is known as the “City of the Viví” and the town of “The Highlanders”. The municipality’s patron saint festival is held in late September in honor of San Miguel Arcángel. Other cultural festivals include the Otoao festival in December and the Angeles neighborhood festival in March.

Utuado is the site of the Caguana Indigenous Ceremonial Park, one of the most important Taino sites in Puerto Rico. It is estimated that this ceremonial center is more than 700 years old. The complex includes a large ceremonial plaza surrounded by petroglyphs. Sport fishing is also available in Utuado’s Caonillas and Dos Bocas lakes, which have abundant catfish, sunfish and bass.

Utuado’s economy is mainly based on agriculture. Coffee and other fruits are grown. The municipality also has factories producing textiles and paper.

Before the discovery of the Island, Utuado, had been populated by diverse indigenous cultures. The main groups were: the archaic, igneris, sub-taínos and finally during twelvth century, the Taínos. Utuado’s name derives from Cacique (Chief) Otoao which means “between mountains”.

In 1512, several landowners had settled there, among them Blas de Villasante and Antonio Cedeño. Both wanted to found a town on their estates, but the governor did not accept. Several centuries passed before another attempt to found a town began.

In 1733, a group of families from Arecibo delegated Don Sebastián de Morfi to request of governor Matías de Abadía the founding of a town according to the laws of the Indies. For such purposes the estates of the Ranch of Utuado, owened by Don Manuel Natal were appraised. In October of 1734 the Ranch of Utuado was sold to the settlers for 569 pesos and 5 reales for the foundation of the new town.

On November, 1734, governor Matías de Abadía granted permission to initiate the foundation of Utuado. Nevertheless, it was not until October 12, 1739, that sixty families found the Villa del Otoao. These families came from Arecibo, San Germán, Ponce and Aguada. Of the total of 117 people, only two were foreign (2 Irish and 2 Andalusians).

The construction of Utuado’s church was finished July 15, 1743, dedicated to its patron San Miguel Arcángel. It was built in wood with a straw roof. In August, 1746, the church was constituted as an independent parish.

Utuado’s population and economy continue growing during the rest of the eighteenth century and all of nineteenth century. By 1769, there were at least 110 farms registered, dedicated to cattle and agriculture.

The contraband activity with the English, Dutch and French was very popular in that era, defying the serious penalties imposed by the Spanish government. It was perhaps the only way to obtain tools and other goods since these articles did not enter Puerto Rico or were of bad quality.

During the nineteenth century, the economic activity was centered around the “black gold” boom, coffee. Between 1864 and 1885, 68 coffee plantations were established. This economic growth induces a rich social life, the opening of a casino and a theater in the town.

On the day of the abolition of slavery in 1873, 167 slaves were given their liberty.

The town progressed so much in agriculture and commerce that on August 20, 1894, the regent Queen María Cristina granted the town of Utuado the title of City.

During 1895, Utuado was the second city in Puerto Rico with a electrical plant and its mayor Juan Casellas in 1897 planned the union of Utuado with Arecibo by train.

At the end of the century, two events finished with this golden era: the San Ciriaco hurricane of 1899 and the change of sovereignty in 1898. The new king now was, “sugar cane”, for which Utuado’s topography was not ideal. During the decade of the 1990, the coffee industry revived making Utuado the second coffee producer in Puerto Rico with 1,600 tons produced in 1,143 farms.

The orders of Pedro Albizu Campos were to resist in each one of the respective towns and then to retreat to Utuado. Once here, to continue resisting at least a month to attract the attention of the UN and to force the intervention of the Security Council. All the nationalistic groups were neutralized in their respective towns. The group from Utuado was originally made up of 32 people, their leaders were Heriberto Castro and Damián Torres. After being repelled by the police, the group was reduced to twelve people who entrenched themselves in Damián Torres’ house. During the shooting, Heriberto Castro died. Due to their obstinate resistance, the house was machine-gunned by four Thunderbolt airplanes using 50 caliber machine guns. The police were reinforced by the National Guard, who arrived around seven pm. At midnight, their surrender was demanded. Minutes later the rebel group, now of nine people, surrenders. From here they were taken through Dr. Cueto Street up to the Recreation Plaza where they were striped of their shoes, belts and pockets. Soon after, the group was taken to the Police Station, where they were executed by machine-gun fire. Four people died and five were severely wounded. A survivor, 17 year old Antonio González, was finished off with a bayonet. The Nationalistic Revolt in all the island ended with a toll of 29 dead people and 47 wounded.

Utuado is also known as:

It is located in the Central Interior Mountain region. Its greatest elevations are to the south where the Central Mountain Range is situated.

On January 5, 1987, the Municipal Assembly of Utuado adopted the official flag of Utuado. The superior green stripe symbolizes the green mountains; the brown stripe (in the middle) symbolizes the rich land of Utuado, and the bottom clear blue stripe is symbol of the rivers and lakes of our land. The Sun of Otoao in the center is a copy of one of most important of our indigenous culture because it is a symbol of the Taíno culture. Designed by Luis A. Lafontaine.

The design of the Coat of Arms of Utuado was made by Dr. J.J. Santa Pinter de Arga and adopted in 1981 approved by the Decree Number 24 of the 1980-1981 series. Its heraldic description is the following one:

The symbolic meaning is the following one:

How to get to Utuado from San Juan.