City of the Sleeping Giant 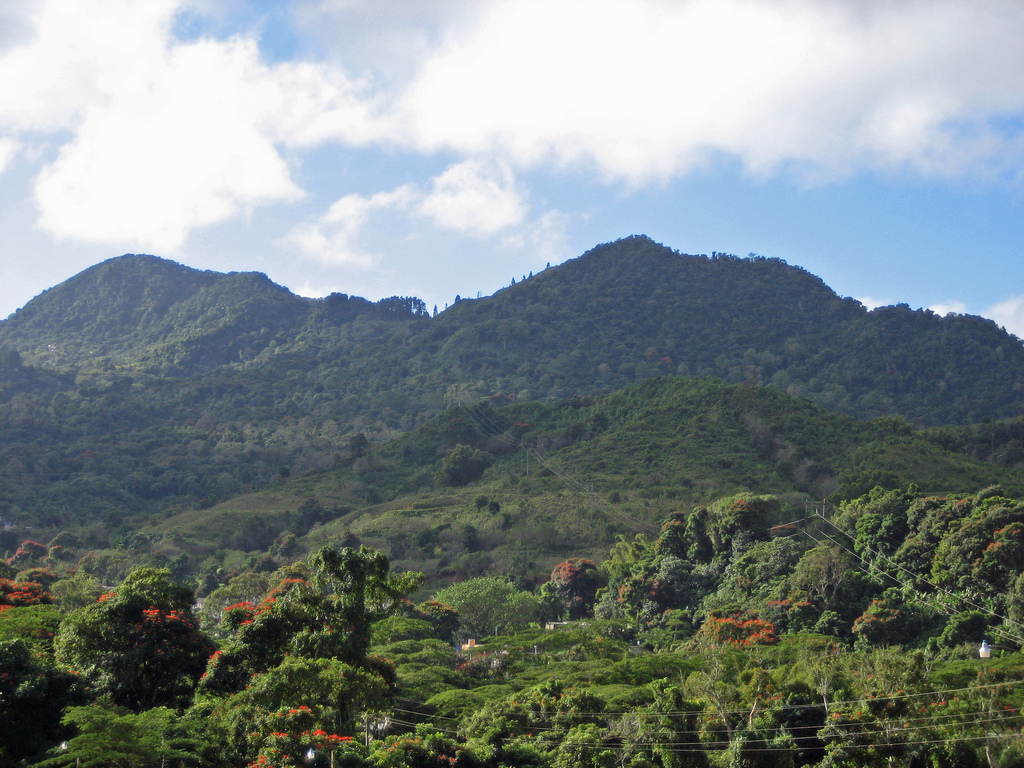 Adjuntas (ahd-HOON-tahs) is known as the “City of the Sleeping Giant”, the “Land of Lakes”, and the “Switzerland of the Americas”. The Cidra Festival takes place in Adjuntas each year in March. The patron saint festival is held around August 21, which is San Joaquín and Santa Ana Day.

Adjuntas is part of the western region of the central mountain range, which gives it its mountainous topography. It is bordered on the north by Lares and Utuado; on the south by Yauco, Guayanilla and Peñuelas; on the east by Utuado and Ponce; and on the west by Lares and Yauco.

Adjuntas also has a number of lakes and reservoirs, which inspired the nickname “Land of Lakes.” Its most important reservoirs are Las Garzas and Lake Guayo. Among the other hydrological resources of the municipality are the Portugués, Grande de Arecibo and Grande de Añasco rivers. Its nickname, the “City of the Sleeping Giant,” refers to the silhouette of a mountain that can be seen from the town.

To the west of Adjuntas, in the center of the coffee growing region, is the Guilarte forest is sectioned into six zones. The forest covers parts of the municipalities of Adjuntas, Peñuelas, Guayanilla and Yauco. Because of its location, it is classified as a high range forest. Its vegetation is quite varied, and among the species of native trees that grow there are the sierra palm, the caimitillo and the granadillo. Among the exotic plants growing there is the eucalyptus.

In the 1980s, a community based organization was created in Adjuntas that successfully stopped a mining project that threatened several towns in the central mountain range. Since then, the environmental and community activism of Casa Pueblo has continued and today it manages the Adjuntas Lands Puerto Rican Biosphere Reserve. The reserve has 36,000 cuerdas (14,149 hectares) of land, distributed across ten municipalities. The region’s elevations range from 2,000 to 4,000 feet (607 to 1,219 meters) above sea level.

Since the late decades of the 19th century, growing coffee has been the main economic activity in the town. Indeed, the founding of the town was tied to this industry. The coffee produced in Adjuntas is well regarded in the local and international markets and today this municipality is one of the main producers of coffee on the island. However, other industries such as raising livestock, growing fruit, and manufacturing clothing and electronic equipment have developed.

The three municipalities of Utuado, Jayuya and Adjuntas make up the most important and richest zone on the island, in terms of mining, due to both the quantity and quality of the minerals found there. The most important are gold and molybdenum, which have been found in association with other minerals, and copper, in the form of chalcopyrite.

Adjuntas was founded August 11, 1815, by Don Diego Maldonado. The name Adjuntas (literally: adjunct, joined) is derived from “joined land” because it was part of the Villa of San Blás de Illescas territory, today known as Coamo.

Since the early years of the XIX century, a conglomerate of twenty families existed in this valley; a place known as “Calle de Canas”. Don Diego Maldonado directed the first parish of this town.

In 1831, four wards comprised the territory of Adjuntas. Today it has fifteen wards. In 1914 the San Joaquin Parish was erected next to the Town Hall. A new parish was constructed in front of the present plaza in 1968.

Adjuntas is located in the western region of the Central Mountain Range (Cordillera Central). Bordering it are: Lares and Utuado to the north; Yauco, Guayanilla and Peñuelas to the south; Utuado and Ponce to the east; and Lares and Yauco to the west.

Adjuntas is also known as:

Adjuntas has one of highest mountains of Puerto Rico; Cerro Guilarte which is the seventh in height in Puerto Rico with 3,953 feet. The territory is mostly mountainous.

The flag derives its symbolism and part of its design from the Coat of Arms. A white band divides it diagonally into two irregular triangles: purple the superior one and green the inferior one.

The bishop’s crozier is an attribute of the Old Testament Patriarchs, and in Adjuntas’ shield it represents the Patriarch Saint Joaquin, father of the Holy Virgin Mary and patron saint of the city. The spinning wheel refers to the house chores and symbolizes Santa Ana, mother of the Holy Virgin Mary and co-matron saint of the city.

The star stands for Our Lady, who was God’s gift to the couple. The bells and crosses refer to the city name, Adjuntas, derived from the fact that both were adjunct or joined in its civil character to the Bishopric and Municipality of Coamo.

The crosses are taken from Coamo’s Coat of Arms (which also presents bells, though as part of a belfry) and have their origin in the coat-of-arms of the village and the Illescas lineage, a name historically related to the ancient Villa of San Blás de Illescas. The coffee boughs refer to the fact that Adjuntas lies in the coffee zone of Puerto Rico. The crown, distinctive of four-towered shields, means that in Spanish times it obtained from the Crown (Spanish Royalty) the privileged title of “Village”.

By José A. Nieves Torres

How to get to Adjuntas from San Juan.