Guayanilla (gwah-yah-NEE-yah) is known as the “Land of Agüeybaná” and the “Fishermen’s Village” and its residents are known as the “mare riders.” The patron saint of Guayanilla is the Virgin of the Immaculate Conception.

Geographically, it is part of the western region of the southern coastal plain. To the north, on its border with Adjuntas, the region is mountainous.

Previously, the economy of Guayanilla depended on growing and processing sugar cane. Later, this was replaced by industries such as petrochemicals. Today, the municipality has a variety of small factories.

Guayanilla was officially founded by order of Governor Miguel de la Torre on February 27, 1833. Among its founders were Catalans, Venezuelans, French and Creole.

The Spaniards gave it the name of Guadianilla in memory of the river of the same name in Spain. Soon it was changed to Guayanilla, this was more of a “native” word that existed in the Taino dialect.

Located in the southern coast, towards the west, it is bordered by: Adjuntas to the north, the Caribbean Sea to the south, Peñuelas to the east, and Yauco to the west.

Guayanilla is also known as: 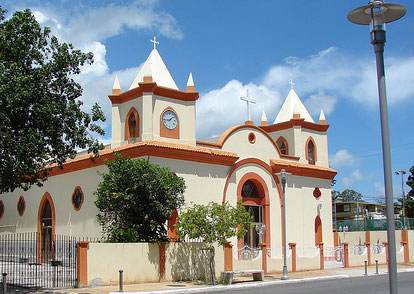 The Central Mountain range borders Guayanilla on the north with elevations that reach 1,000 meters. In the central region the terrain descends remarkably to elevations that do not exceed 430 meters all the way down to the coastal plain where the elevations do not reach 290 meters above sea level.

Guayanilla, Macaná and Yauco rivers. The Yauco River briefly runs through the Boca ward and ends at the port of Guayanilla, where some marshlands can be found.

The flag of Guayanilla shows the main colors of the Coat Of Arms. It has three horizontal stripes of equal width: an upper on of white, a center one of yellow, and the lower one of green.

The Coat of Arms consists of a quartered shield. The first and fourth quarters contain in a green field a hermitage accompanied with two houses, one on each side of the hermitage, all in silver. The openings are highlighted in red. The hermitage of the first quarter is accompanied by a silver star with eight rays. The second and third quarters contain a silver field, with a green lion. The lion of the second quarter holds in its right hand a red flower. In the fourth, a lion holds in both hands a red arrow pointing up. In the center resides a small red shield with a five-pointed crown in gold. Below the small shield is located a blue anchor. At the top a three-tower crown in gold, outlined in black and the openings highlighted in green. The Coat Of Arms may be placed between two sugar cane stems, with its two green leaves crossed at the bottom and drawn in the conventional heraldic way.

The hermitage and the houses represent a primitive Christian town of Puerto Rico, specifically the one of Santa Maria de Guadianilla or San Germán el Nuevo, that were was established in the margins of the Guayanilla River, in the middle of the sixteenth century. The star symbolizes Our Lady; La Inmaculada Concepción, patron of the population, and the waved stripe, the river.

The repetition of this subject, without the star, in the last quarter, alludes to the second foundation of Guayanilla, in 1833. The lion is taken, with alteration of its colors, from the shield of Ortíz de Almendralejo, Extremadura, a region where Don Rodrigo Ortíz Vélez came from, mayor and defender of Santa Maria de Guadianilla, and founder of San Germán de las Lomas de Santa Marta, a place where the primitive population was transferred during 1570. It represents, in addition, the value and the intrepidity whereupon Don Rodrigo and his men defended the town against two attacks and attempts of invasion: One by French Corsairs and another one by Caribbean Indians. The first victory is symbolized by the lily flower and the second by the arrow, which in this case represent the battles.

The old crown, in the small red shield in the center, represents Cacique Agüeybaná, main monarch of the Tainos of Borinquen, whose yucayeque was located in the Guianía region, where today Guánica, Yauco and Guayanilla are located. The blue anchor in a gold field, symbolizes the beach and the port of Guayanilla. The crown is standard upon municipal shields and symbol of the unity that must characterize the inhabitants of a population or municipality united in its defense of its autonomy, conservation of its historical traditions and promotion of the communal well being.

The sugar cane stems indicate that Guayanilla is located in a sugar cane zone and the importance that the sugar industry has had in the history of the town.

How to get to Guayanilla from San Juan.