Town of The Three Peaks

The autonomous municipality of Jayuya is located in the central region of Puerto Rico. It is bordered by Utuado and Ciales on the north, by Ponce, Juana Díaz and Orocovis on the south, by Ciales on the east and Utuado on the west.

Jayuya is located in the highest elevations of the Central Mountain Range, site of the highest mountains in Puerto Rico.

Jayuya is also known for its indigenous monuments: The Written Rock and the Tibes Rock, located in the Coabey sector; The Tomb of the Indian in Jayuya-Pueblo sector; and the Indigenous Mural in the Zamas sector, where the Jayuya sun petroglyph was found.

The Cemí Archaeological Museum exhibits archaeological pieces from the indigenous cultures of the island. The municipality is also the site of the National Indigenous Festival of Jayuya, one of the most important folk festivals held on the island. It honors the memory of the Tainos.

Jayuya also is known throughout the region for its wood experts, specializing in the sculptures of our national birds.

Jayuya (hah-YOO-yah) was founded in 1911 and is located in the central part of the island, in the northern border of the Toro Negro Forest Reserve, a 7,000 acres park that includes the Cerro Puntas, the highest mountain of Puerto Rico. The city derives its name from Hayuya, head Indian of the Taínos.

The Jayuyanos take great pride in their cultural roots of the region. Jayuya counts with three monuments that commemorate the Taíno inheritance: a statue to Hayuya, the first monument constructed in Puerto Rico in honor to the Taíno Indian, Tomb of the Puerto Rican Indian, a tomb that contains a Taíno skeleton buried in the traditional fetal position. Finally, the Piedra Escrita (Written Stone), this proudly demonstrates petroglifics done by hands of the Indians. In November Jayuya celebrates a festival in honor of Chief Hayuya.

Jayuya is located en the center of the island, it borders with Utuado and Ciales to the north, south with Ponce, Juana Díaz and Orocovis, west with Utuado and east with Ciales.

Jayuya is also known as: 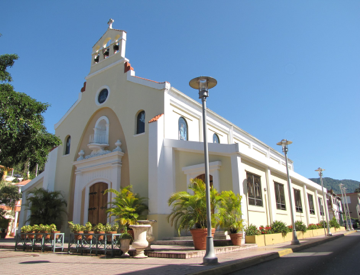 Jayuya is located in one of the most elevated regions of the Central Mountain Range reason why its terrain is very irregular and home of many mayor mountains of Puerto Rico, which include the Cerro Puntas, the highest mountain of Puerto Rico with 1,338.0 meters / 4,369 feet.

The flag is rectangular in shape and derives its symbolism from the Coat of Arms. It represents the spirit of the people that are proud of their Taíno heritage and representative of hospitality: values of the puertorrican people.

The red shield symbolizes the harmony and brotherhood that characterizes the people from Jayuya. Above the shield a three tower crown, standard for municipalities. Inside the shield centered at the top a Taíno crown, that is a generic symbol representing Chief Hayuya’s monarchy.

In the center a green band with a white border representing the Tres Picachos (Three Peaks), the green color of the countryside and the town’s matron, La Virgen de la Monserrate. At the bottom, Jayuya’s Sun, Taíno hand carving found only in Jayuya.

How to get to Jayuya from San Juan.