Town Of The Sweet Orange 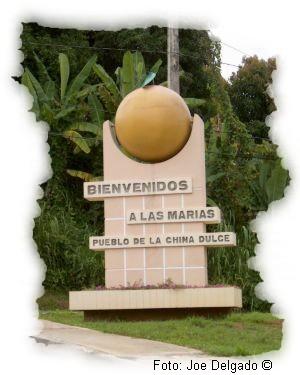 The town is set in the western region of Puerto Rico. This western Puerto Rican town is bounded by the municipalities of San Sebastián to the north, Maricao to the south, Lares to the east, and Mayagüez and Añasco to the west.

Las Marías is part of the geographical region of the Cordillera Central mountain range. Well-known peaks include Las Marías, Plan Bonito, Valladares, Godén, and Herencia. The Urayoán mountain range runs through the southwestern part of the municipality. Due to its topography, nearly 94 percent of the municipality’s land consists of steep slopes. Any plains or fairly flat lands belonging to Las Marías are found mainly in the valleys formed by the Grande de Añasco, Guaba, and Arenas rivers.

The municipality’s waterways include the Grande de Añasco River, also known as the Guacio River, which marks the city limits between Las Marías and San Sebastián.

The municipality’s economy is primarily agricultural. Its major crops are coffee and produce, such as plantains, bananas, and citrus fruits, especially oranges. Most of the jobs available in Las Marías are created in sectors such as construction, retail sales, health care, and social services. In addition, the town’s old coffee haciendas are a great tourist attraction. Las Marías also has a garment factory and marble quarries. The marble is used in the manufacture of floor tiles and terrazzo.

Populating Las Marías began late in the history of the island because of difficulties in building roads in this region. The lack of roads made cattle operations difficult, which were the origin of almost all the local economies. Its foundation was carried out by Canaries and Majorcans.

Las Marías was a ward of its capital San Sebastián, which was at a great distance. In a 1857, when the Furnias ward of the municipality of Mayagüez was reconstituted as a separate parish, having a population of 249, the residents and proprietors of Las Marías made a request to the Provincial Delegation to be segregated from San Sebastián and be incorporated into the parish of Furnias. Such incorporation was authorized in 1859.

But the development of Las Marías already had begun, with a remarkable increase of the population in just a few years. For that reason the local population asked for authorization from the government to reconstitute themselves as an independent town from Mayagüez.

On March 20, 1871 the Provincial Delegation authorized this request and it was carried out. Shortly after, Las Marías was constituted as an independent parish under the avocation of the Inmaculada Concepción de María. Once constituted it shared with Mayagüez military, judicial and ecclesiastical matters. By the end of this century Las Marías was made up of the following wards: Anones, Alto Sano, Bucarabones, Buena Vista, Cerrote, Chamorro, Espino, Furnias, Las Marías Pueblo, Naranjales, Palma Escrita, Purísima Concepción and Río Cafías.

Located in the west, towards the center of the island, it is bordered byk: Ańasco and San Sebastián to the north, Maricao to the south, Lares to the east, and Ańasco and Mayagüez to the west.

Las Marías is also known as:

Las Marías is located in the spurs of the Central Mountain Range with the municipality of Maricao. Some of its elevations are: Las Marías, Plan Bonito and Herencia. The Urayoán Mountains, that run thru the southwest separate it from Mayagüez.

Las Marías is well known for its numerous water springs. It is bathed by the Grande de Ańasco river (known as Guasio), which serves as border with San Sebastián. Its affluents are the: Guaba, Bucarabones, Mayagüecilla, Sands, Casey and Cańas rivers; and the Fría, Mayagüecilla, La Verde, Las Marías, Los Verracos, Cintrona, Vélez, Collera, Pepinera and La Mota gorges.

The flag is divided by an imaginary diagonal line whose ends are the superior left angle of the flag and the opposite inferior angle. The superior part is yellow and the inferior one green. It was designed by the Marieńo historian José Luis Medina Caraballo.

The shield is divided into six parts with three in silver and three in blue. A “María” tree (Callophylum brasiliense antillum), with a pair of coffee tree branches to the sides of its trunk, adorns each silver part. The monogram and crown of Nuestra Seńora la Santísima Virgen de Plata is placed in the top center portion of the shield. The shield’s border is red with a broken chain at the bottom. Above the shield resides three tower crown in gold.

The monogram refers to the old Parish of Dulce Nombre de María, origin of the town, and the frequent use of the name of Maria here by people of both sexes. The name of the municipality refers directly to the María trees, although they do not abound in the territories of the municipality, act as talking souls.

The blue and silver, main colors of the shield, also refer to the Virgin. The coffee tree branches indicate that Las Marías is located in the coffee region of Puerto Rico and that coffee has been always one of its main agricultural products.

The broken chain, symbol of freedom, recalls the participation of the revolutionaries of Las Marías in the “Grito de Lares” revolt, who in 1868 proclaimed in the town of Lares the independence of Puerto Rico.

How to get to Las Marías from San Juan.