Town of Our Lady of Monserrate 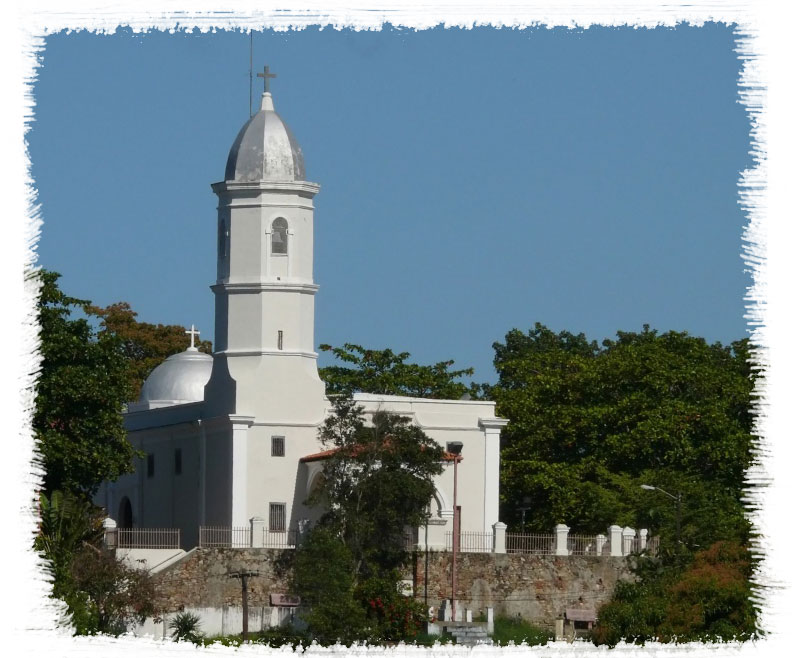 Hormigueros is located in the western coastal plains and western side of Puerto Rico. It is bordered on the north by Mayagüez, on the south by Cabo Rojo and San Germán, on the east by San Germán and on the west by Cabo Rojo.

The municipality”s economy is based on commerce and manufacturing. Manufacturing includes pharmaceuticals, needlework, machinery, and electrical and electronic equipment. There is limited agriculture and cattle and dairy farming. The town formerly grew tobacco, plantains, taniers, sugar cane, and coffee. There were several wooden sugar mills known as trapiches and rum was produced. Central Eureka was founded in 1881, and eventually ground up to 350,000 tons of sugarcane. The central mill closed down in 1979.

The translated name Hormigueros means “anthills”, but in this case it will be referred to as “ant trails” represented by the multitudes (true human ant trials) that visit the sanctuary from all points of the island every September 8 for the annual festivity of Our Lady of Monserrate. It is said that the name derives from the Taíno word “Horomico” that is claimed to be the name of a river or a Taíno indian. Since 1640 it was already known as the Hermitage or Sanctuary of Hormigueros. At the time it was part of San Germán.

There are two legends; one says that in 1599, Our Lady of Monserrate revealed herself to Don Gerardo González when he was attacked by a bull, González invoked the name of the Virgin. Immediately, the beast fell with its legs splintered and its temple touching the ground, which seemed as if the beast was praying. The second account is about Gerardo González’ daughter; she strayed into the forest, turning up several days later safe and sound as the result of a miracle by Our Lady of Monserrate.

In both versions of the legend Gerardo González in 1775 gratefully erected and dedicated in 1775 a church to Our Lady of Monserrate that gave birth to the town of Hormigueros. It was founded officially April 1, 1874, separating it from San Germán.

Hormigueros is also known as:

Due to its location in the Western Costal Plain region its terrain is mainly uniform.

The Guanajibo River and its affluents; Rosary, Seco and Hondo rivers.

Manufacturing companies of textile, paper, medical and electrical equipment. Cattle and sugar cane are part of the economy, although in a smaller scale.

The flag is based on the blue and white colors and the design of the municipal shield. It consists of a blue cloth with a horizontal white rhombus. Superposed on the white rhombus there is another blue rhombus with a white globe outlined in blue with a cross.

The globe with the cross are standard for royalty and represent the dominion of Christ over the world. The image of the Virgin is a traditional icon attribute to Our Lady of Monserrate as much as for Jesus that both carry the globe in their hands.

The shield is formed by a blue rhombus, with silver-plated edge. On the blue bottom, a green hill, a representation of Our Lady of Monserrate de Hormigueros’ Sanctuary, with its silver stairway. The border appears to be splashed by black ants, ready, on guard symmetrically. On the top of the shield resides a crown formed by a wall, with three towers that have blue doors and windows. The joints of the stones are filled with blue lines. The shield is surrounded by two chains that begin at the crown and finish under the bottom part of the shield with the last links broken.

The symbolism of the shield, is obvious to a large extent, particularly because it combines the streamlined representation of a historical and characteristic building of the town, the Sanctuary of Our Lady of Monserrate. In heraldic terms the surrounding ants mean “talking souls”, heraldic figures that say directly the name of the town. In this case the talking souls are ants that have arranged themselves on the silverplated bottom. The ants also represent the multitudes that go to the sanctuary, from all over the island, on occasion of the annual festival of Our Lady of Monserrate every year on September 8. It is reasonable for Hormigueros to be represented by the Sanctuary that for centuries has dominated the panorama of the town, from which the population rose to become a municipality separated from San Germán.

The chains, a suggestion given by the people of Hormigueros, recall Segundo Ruiz Belvis, whose birthplace can be seen from the sanctuary. Specifically it symbolizes his fight for the abolition of slavery and the national freedom of Puerto Rico. Additionally, the last name and lineage of Segundo Ruiz Belvis have held a close relationship with the history of the Sanctuary. Judging by recent investigations, the Ruiz Belvis family, who held during many generations the honorary position of keepers of the Sanctuary, descend directly from the sixteenth century in appreciation for a miracle attributed to the intervention of Our Lady of Monserrate. The crown is a standard for towns, cities and municipalities.

How to get to Hormigueros from San Juan.