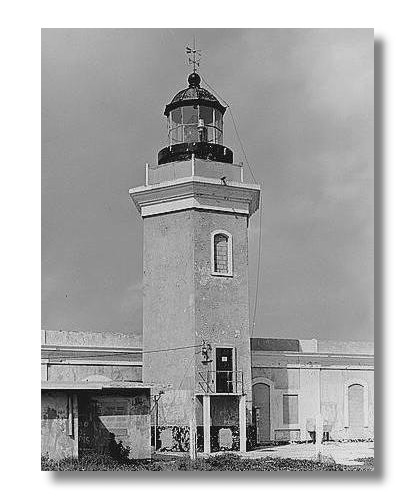 Cabo Rojo (KAH-bo, ro-ho) is known as the “Cofresí’s town,” “the hatchetmen,” “Betances birthplace” and “the capital of internal tourism in Puerto Rico”.

The geography of this town is characterized by the diversity of its geography, its natural resources, and the diversity of its ecosystems. Its beautiful landscapes include beaches as Combate, Boquerón, Playa Sucia, Puerto Angelino, Joyuda, lagoons (Atolladero, Joyuda, Guaniquilla, and Boquerón Channel), bays (Bramadero, Puerto Real, Boca Prieta, Boquerón, Salinas and Sucia), salt flats, the Boquerón State Forest, and the Bermeja range. These features make this an important destination as well as a site for scientific research in Puerto Rico.

The municipality is home to the Cabo Rojo National Fish and Wildlife Reserve,which includes the Salinas Interpretive Center, as well as two marine laboratories located in Punta Arenasand El Combate. Another tourist attraction is the cave used by the legendary pirate Cofresí, where it is said that he hid the booty he stole from the merchant ships that sailed through the region.

As an important tourist center, Cabo Rojo counts with facilities such as the Boquerón Resort Center, the Yatch club, Villa Taína, and the fishing village. There are also many hotels and restaurants that attract many visitors during the summer months, making tourism another important sector in the municipality’s economy.

Cabo Rojo is on the southwest coast of Puerto Rico, bordered on the north by Mayagüez and Hormigueros, on the south by the Caribbean Sea, on the east by the towns of San Germán, Hormigueros and Lajas and on the west by the Mona Channel, in the western coastal plan region.

Cabo Rojo derives its name from Christopher Columbus’ companions during his second voyage to the Americas. During this trip the Admiral discovered Puerto Rico. While trying to to round the southeastern end of the island the crew observed the reddish color of the terrain of that zone (well known today as Los Morrillos) and named it “Cabos Rojos”. Nevertheless the Spaniards were not the first ones in observing the beauties of this land.

Through anthropological studies there, the general idea that at the beginning of the Christian era, the Cabo Rojo coast was inhabited by a native group called Siboney. Later on and with the arrival of the Aruaco groups, new establishments were developed in the region known as the Ostinoide culture, which cultivated the yuca “casabe” plant and crafted ceramics. The American archeologist Christopher Goodwin, asserts that Punta Ostiones was the first center of merchandise interchange among the native cultures of the island with other groups of the Caribbean.

Most of the population groups of nowadays coincide with the places where centuries ago the indigenous villages were located. The historian Salvador Brau y Asencio comments that in 1512 the first group of settlers inhabited an area near Los Morillos.

As early as 1525 the Cabo Rojo salt mines were of great economic importance to the town, the envy of neighboring towns.

Cabo Rojo’s first request to constitute itself as a town was denied in 1759. Don Nicolás Ramírez de Arellano was entrusted to take the first steps for founding the town, which were completed in 1771. Cabo Rojo or Tierras Bajas de los Morrillos (Low Lands of Los Morrillos) at the moment has a population that exceeds the 40,000 inhabitants.

The Spaniards constructed the Cabo Rojo Lighthouse in 1882 on a limestone cliff 200 feet above the sea. Also known as “Los Morillos Lighthouse,” this old lighthouse was automated in 1967.

Located in the southwestern end of the island, it is bordered by: Mayagüez and Hormigueros on the north, the Caribbean Sea on the south, the Mona Passage on the west, and Hormigueros, San Germán and Lajas on the east.

Cabo Rojo is also known as: 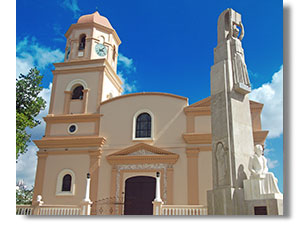 Because of its location in the Western Coastal Valley, its territory is mainly flat. Nevertheless, the following hills can be mentioned; Mariquita 987 feet, Buena Vista 850 feet, Vargas 623 feet and Los Peñones de Melones with 328 feet.

The flag contains elements of the coat of arms, excluding the sword, the anchors and the crown. The Municipal Assembly of Cabo Rojo and the Institute of Puerto Rican Culture officially approved the flag and coat of arms in 1971. Mr. Roberto Bíascochea created them.

The main colors of the shield – blue, red and silver – refer to the fundamental aspects of the life of two eminent caborrojeños; Don Nicolás Ramírez de Arellano and Dr. Ramón Emeterio Betances.

These three colors are latent as much in the coat of arms of the Ramírez de Arellano lineage as in the symbols of the ideals of Betances. They constituted in the second instance, the chromatic representation of the principles of freedom, applied by Betances to all human beings.

The point or red triangle symbolizes the “cabo bermejo” (cape bermejo) in Los Morillos. The blue and white, with the anchors, represent the sea that bathes our coasts. The flaming sword, is an attribute to San Miguel de Arcángel, patron of the town. Finally, the crown, which heightens and distinguishes the shield, stands for the status of municipality.