Lajas (LAH-huz) is known as the “Cardinal City” and “The rock throwers”. The patron saint is the Virgin of Candelaria, whose festival is held in February.

The municipality has become a favored site for tourism, both for locals and foreigners. La Parguera is a tourism center that includes the phosphorescent bay and mangrove canals.

The municipality is situated in the southwest part of Puerto Rico. It is bordered on the north by the town of San Germán and slightly by Sabana Grande on the northeast, on the south by the Caribbean Sea, on the east by Guánica and on the west by Cabo Rojo.

In recent years, the population of the town has grown significantly as new roads and facilities, both public and commercial, have been developed. The sectors of the economy that generate the most employment are manufacturing, retail and hospitality. Agriculture plays a main role in this municipality. Among the crops are vegetables, melons, pineapples and sugar cane. Lajas is the leading producer of sheep and also ranks high in the production and sale of cattle. Fishing is also a significant economic activity in Lajas, especially in La Parguera, which is one of the most productive fishing zones.

Lajas has been recognized as one of the cleanest towns in Puerto Rico. It received this honor in 2004. It is also the home town of the first Puerto Rican Catholic cardinal, Luis Aponte Martínez. That is why the municipality is called the “Cardinal City.”

Since 1874, neighbors of the wards of Lajas, Santa Rosa, Lajas Arriba, La Plata, Costa, La Parguera, Sabana Yeguas, Candelaria, Palmerejo, Paris and Llanos asked the Provincial Delegation to allowed them to become town. These neighbors had asked for their segregation simultaneously with the neighbors of the wards that today belong to the municipalities of Las Marías and Hormigueros. These, in opposition to the neighbors of Lajas, had their requests granted, becoming municipalities in 1871 and 1874 respectively, even though they counted with a population smaller than the one of Lajas.

The 15th of April of 1882, the neighbors of Lajas asked for a quick resolution of the file related to the segregation of the wards before mentioned of the municipality of San Germán. This segregation was in accordance with the Municipal Law of 1878 in which the requirements for the establishment of a municipality were enunciated. Some of the requirements mentioned in the Law and with which they were fulfilled to quality were:

In addition, it was argued that this request of segregation was not against the legitimate interests of the population of San Germán.

On July 1, 1883 the General Governor of the island, don Miguel de la Vega Inclan, proceeded to constitute the municipality of Lajas. It included eleven districts: Lajas, Santa Rosa, Lajas Arriba, La Plata, Palmarejo, Paris, Llanos, Candelaria, Sabana Yeguas, La Costa and La Parguera. The wards counted then with a population of 6,238 inhabitants. This was the last segregation undergone by the municipality of San Germán, whose City Council was against such segregation, when they asked the General Governor for the restoration of this municipality to San Germán, due to a reduction to the State Treasuries of the municipality, the diminution of the number of contributors and the lost of productive lands.

On September 8, 1883 the plaza and the streets of Lajas were given names. The plaza was named Candelaria in honor to the Virgin Nuestra Señora de la Candelaria, matron of the church of Lajas. The plaza was located in front of the church. Lajas counted with only six streets: Victoria, Concordia, Lealtad, San Blas, Amistad and Unión. The first four surrounded the plaza and the other two extended outwards from the plaza. The enumeration of the streets was done from east to west, using pair numbers on the left and odd numbers to the right.

In 1889 the Mayorship House was built, it was a two story building constructed in concrete, brick, wood and zinc. During the years it has been home for various institutional uses, to include government, with the following dependencies or organizations:

The name Lajas is from Spanish origins, due to its arid terrain. Lajas is the birthplace of Puerto Rico first catholic cardinal; Luis Aponte Martínez. He was ordered Priest in 1950, Bishop in 1960 and in 1965 exalted to Bishop of San Juan. In 1973 he was ordered Cardinal, becoming the first Puerto Rican to achieve this title.

Located in the southwestern part of the island, it borders north with San Germán and Sabana Grande, south with the Caribbean Sea, west with Cabo Rojo and east with Guánica.

Lajas is also known as:

Lajas forms part of the regions known as the Valley of Lajas and the Southeast Hills. Its territory extends thru a vast valley between the Santa Marta Lomas (north) and Sierra Bermeja (south). Sierra Bermeja’s highest elevation is 1,000 feet and the lowest is 40 feet above sea level. Two main natural features exist which are the Fluorescent Bay in the Parguera and the Cartagena Lagoon between the Llanos and Palmarejo wards.

The Valley of Lajas lacks rivers. To the east of the valley it is the Río Loco of Yauco, and to the north the Ganajibo river. For irrigation of its fertile lands it counts with the Valley of Lajas Irrigation Project, established in the decade of the fifties. It consists of a main channel that starts at the regulating dam of Yauco’s Rió Loco, up to the Valley of Lajas, throughout the northern border of the Valley, follwing the base of the hills all the way to Boquerón. Several lateral branches serve water to the lands located to the south of the main channel.

The flag consists of three (3) horizontal stripes; the superior one green, the center white and the bottom one yellow. A fourth stripe, of equal width forms a cross. In the center of that cross we have two arms united with a ripe yellow pineapple. The cross is surrounded by eleven gold stars; five in the superior (north) part and six in the inferior (south) part of the cross forming a circle.

The green stripe stands for the Valley of Lajas, the agriculture in all its extension. The yellow stripe refers to the wealth of the fertile lands. The white stripe, refers to the union of all the inhabitants and indicates that Lajas is a town of love, peace and friendship. The cross, which is formed by the intersection of the two white stripes, stand for the religiousness of the town, the faith in God and the belief in something divine. 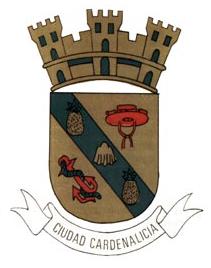 The shield of Lajas is of Spanish style designed in the following way: The body is gold with a green band crossing it diagonally right to left; the color gold stands for the wealth of the land and green stands for the beauty of the valley which is a gift from mother nature to Lajas.

The band is adorned, at each end, with a pineapple bordered in gold and black. In the center of the band, also in gold, a marine shell. The pineapple refers to Lajas’ regional fruit – the “cabezona” pineapple- , the shell refers to the founder of the town, Don Teodoro Jácome Pagán. (in Spanish heraldic, the shell stands for Santiago, Jácome, Diego…)

In the left superior side there is a red cardinal’s hat and in the inferior a red anchor with a green; the hat the symbolizes our Cardinal Luis Aponte Martinez; and the anchor, La Parguera a tourist jewel of Lajas. At the top, the shield has 3 tower castle, each one with two windows and one door. In its base, it also has, three doors of identical size. The castle stands for the autonomy of the municipality and the doors and windows for the eleven wards.

On the bottom, outside the shield, a banner with the inscription “Cardenalicia City” (Cardinality City). The banner and the inscription appear in black. This banner stands for the honor that Lajas for being the birthplace of the first Puerto Rican to obtain the tattle of Cardinal.

How to get to Lajas from San Juan.