Guánica is situated on Puerto Rico’s southwestern coast, and is bounded by the Caribbean Sea to the south and by the towns of Sabana Grande to the north, Yauco to the east, and Lajas to the west.

Guanica has a number of natural attractions such as its beaches: Caña Gorda, Ballena, Santa, Jaboncillo, and Las Pardas, to name a few and the Guánica State Forest (a xerophytic, or dry, forest reserve). This forest is extraordinarily well preserved, and has been the subject of much study. Because of its scientific importance, it was designated as an international biosphere reserve in 1981 and a Forest Reserve in 1985.

There are also archeological sites, as well as historical monuments such as the Caprón fortress and its watchtower, an observation post used during the Spanish colonization situated on Cerro Caprón (Caprón Hill).

Guanica’s workforce is employed primarily in construction, retail sales, and the hospitality industry. The town’s economy, however, also centers on raising produce and cattle and on the extraction of salt from the sea. Other industries, including manufacturing (food and food products; electronic equipment; metal, rubber, and plastic goods), have also contributed to the local economy.

Guanica was founded in 1914. In 1906 started eight years of intense civic fight in which the "Guaniqueños Segreguistas" (Guanica Segregationists) knocked on all doors and took their case to all the newspaper columns of the country, convincing the delegate to the Camera (Governing Body), Don Carlos A. Del Rosario, to initiate a project endorsed both by Union Delegates and by Republican Delegates who composed the Camera in those days. The project was approved by Governor Yaguer, segregating Guanica from Yauco making it a municipality March 13, 1914.

The origin of the name of "Guanica" comes from the agglutination of three indigenous roots: Guá, "he aquí" (here is); ni, "agua" (water); and ca, "lugar" (place). Therefore meaning, "he aquí un lugar de agua" (here is a place of water).

Guanica is a young municipality, but its history goes back to the time of the colonization. The historians say that when Juan Ponce de León arrived to the Island in 1508 disembarking at the Bay of Guanica, Agüeybaná (the main Chief of the island) resided in this territory. At that time Guanica represented the indigenous capital of the Island.

Guanica was also the landing place of North American troops in 1898.

Located on the southern coast, it is bordered by: Sabana Grande to the north, the Caribbean Sea to the south, Lajas to the west, and Yauco to the east.

Guánica is also known as: 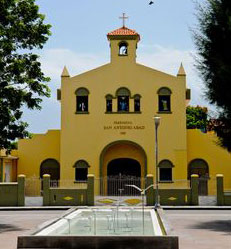 The territory is almost level, except for small elevations: the Lajara hills (in Montalva), which is the highest one, with 178 meters (584 feet), the Abra (in Ensenada), Seboruco (in Carenero), and El Peñón (in Ciénaga). The Montalva , Las Pardas and La Brea hills, all in the Montalva ward, are below 100 meters (328 feet) of height.

The Loco River, which rises in Yauco and flows into Guanica by the northeast and ends at the Guanica Bay. Also forming part of this systems is the Guanica Lagoon.

The five waves, blue and yellow represent the Guanica Bay, a fragment of the Official Shield of Guanica. It symbolizes the indigenous territory of Guaynía, name doubtlessly related to Guanica and that Fernando Fernandez de Oviedo, in his General History of the Indians, says that in this region several rivers of gold ran. The name of Tavara or Tábora recalls, the maternal last name of Don Cristóbal de Sotomayor given to the town because of its proximity to the Guanica Bay.

Shield divided in four quarters. In the superior right side, it has a "bohio" (hut) under a crown that represents Cacique Agüeybaná, whose yucayeque (indian territory) was in this region. In the superior left quarter, a lion representing Juan Ponce de León.

The checkered strips over a silver-plated background in the inferior right side represent the shields of Don Cristóbal de Sotomayor, founder of the town of Tavara, the actual location of Guanica. The waved stripes represent the bay of this town. The branches surrounding the shield represent the sugar cane industry that was very important in this region.

How to get to Guánica from San Juan.