City of the Advancers 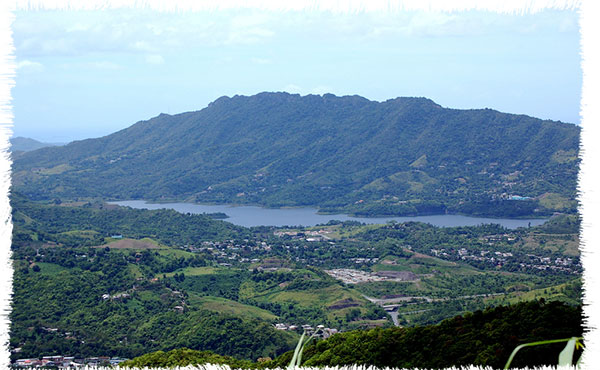 Villalba (vee-YAHL-bah) is known as “Cuidad de los Avancinos”, the “City of Cooperatives” and the “City of Pigeon Peas.” Its residents are called Villalbeños. The patron saint is Nuestra Señora del Carmen.

The municipality is known as the City of Advances because the first hydroelectric plant in Puerto Rico was built there in 1929. This event made Villalba the first town on the island to have electricity. Today, the plant is called Toro Negro and generates electricity for all of Puerto Rico.

Villalba is bordered on the north by the municipality of Orocovis, on the east by Coamo, and on the south and west by Juana Díaz. Geographically, Villalba is part of the sub-region known as the southern hills. It is located south of the central mountain range in the rainy part of the semi-arid foothills.

The municipality is also the site of Indian Cave. This cave is deep, dark and wet. Archaeologists studied the site in the 1970s when the Guaynía Archaeology and History Society of Ponce located, inventoried and studied two caves in the Hacienda El Limón.area of the Caonillas Arriba sector.

Planting and harvesting pigeon peas are part of the economy of the municipality. The crop is processed and canned in a plant in Villalba. The municipality also has various factories producing machinery and electronic equipment, as well as food products and aluminum containers.

Before the official foundation of Villalba, it was a ward of the town of Juana Díaz, as well, it had been a ward of Coamo until 1798. In 1846, the geographic jurisdiction of Juana Diaz constituted the districts: Río Cañas Arriba, Río Cañas Abajo, Guayabal, Lomas, Sabana Llana, Capitanejo, Jacaguas, Cayabo, Collores, Tijeras, Hato Puerco Arriba, Hato Puerco Abajo, Caonillas Arriba, Caonillas Abajo, Villalba Arriba and Villalba Abajo.

In 1917 the last six wards were separated from Juana Diaz and forming an independent community with the official name of Villalba. On the origin of the name of Villalba there are several theories, but it is necessary to emphasize the possible relation with the town of Villalba of the province of Lugo in Galicia, Spain, by virtue of the entailment of the Figueroa family with this Spanish town and also the entailment of the visit of the Duke de Alba to this town.

The official process for the segregation of Villalba as independent territorial unit from Juana Diaz, began in 1916 by don José Víctor Figueroa, delegate of the camera for the District of Ponce from 1914 to 1917; representative from 1917 to 1924 and senator from 1924 to 1928.

The founders of Villalba were José Ramón Figueroa and Walter McJones. The idea of the separatist conscience of the community of Villalba goes back to the year 1875, when Pope León XIII (by managements of don José Ramón Figueroa and his emissary before the Pope, don Ramón Soldevilla), granted permission for the construction of the parish that later would be named Virgen del Carmen, in honor to doña Carmen Reyes de Figueroa, her godmother and founder.

Villalba became an independent community by virtue of the project of the Camera number 71, represented by the Camera delegate, don José Víctor Figueroa Reyes, the 23rd of March of 1917, which became Law 42 of the 12th of April of 1917 and began to be in force the 1st of July of 1917.

Located in the central region, closer to the southern coast, its border are: Orocovis to the north; Juana Diaz to the south; Coamo to the east and Juana Díaz to the west.

Villalba is also known as:

Located to the south of the Central Mountain Range, in the rainy area of semi-arid hills of the south.

It is watered by the Jacaguas river and its affluents the Achiote, Cuesta Pasto, Meolaya, de los Güiros y Jagüeyes gorges, and the Toa Vaca river, that receive waters from the La Cotorra, Limón and Grande gorges. The hydrographic system is completed by the Toa Vaca and Guayabal dams.

The design and colors derive from the Municipal Coat of Arms, with the difference that the metalic gold and silver are replaced by the colors yellow and white, respectively. Its organization consists of four horizontal, unequal stripes in width, that from top to bottom have the following order: green, white, green and yellow. In the immediate side to the flagstaff, in the superior stripe, appears, in white color, the star of the shield.

In a green field, in bridge, a Puerto Rican villa of the XIX century, with six houses and one church, in silvera nd red: the church is adorned with the Coat of Arms of the order of “del Carmelo”; and in the upper right hand, a silver star. Gold border with five calabash (higüera, Crescentia cujete L.) leaves. To the top; a three tower gold crown.

The town this represented by the buildings and the star of the dawn. The shield of the order del Carmelo refers to our Señora del Carmen, matron of the population. The other symbols refer to the last name ‘Figueroa” , the border recalls the founder, don José Ramón Figueroa. The crown is a standard of the municipal shelds and stands for the union and solidarity in the defense of its traditions, liberties and comun good.

How to get to Villalba from San Juan.