Coamo (ko-AH-mo) is known as the “Villa of San Blas de Illescas”, “the old town”, “the town of the thermal waters”, and “the center of the universe”, the towns people are known as the “marathon runners”. The name of the town, a Taino word, means “extended plain”.

Coamo is located to the south of the Central Mountain Range. It is bordered on the north by Orocovis and Barranquitas, on the south by Santa Isabel and Salinas, on the east by Aibonito and Salinas, and on the west by Villalba and Juana Díaz. The hydrography of the town is based on the Coamo River, which springs from Pulguillas Ward and runs for 35 kilometers (22 miles) to empty into the Caribbean Sea.

Coamo is very popular for its thermal waters known as the “Coamo Baths.” There is also an inn in the area of the baths. The first guest house on the site was built by Andrés G. Luhring in 1847. Ten years later, José Usera became the proprietor and built an elegant building using brick and rubble masonry and local woods. Today, the only remains of the original hotel are the restaurant, the thermal water pools and a few walls that add to the historic ambiance of the modern inn.

Other economic activities include agriculture and animal husbandry (chicken, cattle, and produce) and a plant that manufactures radio parts.

The name Coamo is derived from the Taíno word, which means extensive valley. In 1519 the construction of the town began with the name San Blas de Illescas. It was officially founded July 15, 1570, making it one of the oldest cities in the island after San Juan and San Germán. Bishop Diego de Salamanca was granted permission to establish a church in Coamo to provide the residents of that area basic religious services. Before 1582, twenty families lived in Coamo in the same area where the Taínos had their village of Guayama.

Diego of Salamanca founded the hermitage of San Blas and lived there until 1618. He was helped by economic aid from the families of the city. The church in 1616 was constructed in brick and straw. Its architecture had the simple characteristic lines of the construction done on the island at the time. Coamo is famous for its thermal baths containing healing and therapeutic waters. Long before the Spaniards arrived to the island, the Indians bathed in these waters, and according to legend, this was the fountain of youth that the Indians told Ponce de Leon about. He was mistaken when he went to Florida to look for it, and unfortunately for him the search would end in his death.

Coamo is located in the southern region of the Central Mountain Range. It is bordered by: Barranquitas and Orocovis on the north, Santa Isabel on the south, Juana Díaz and Villalba on the west, and Aibonito and Salinas on the east.

Coamo is also known as: 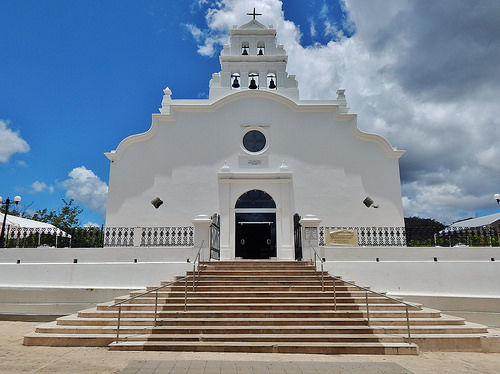 The most outstanding elevations appear in the Cuchillas de Coamo and Cerro Pulguitas. Other hills are the Santa Ana and Presidio.

Part of this system are the Coamo, Descalabrado, Lapa, Jueyes and Mina rivers. The hydrography includes the Coamo Thermal Baths, which are nourished by the Coamo river near the Santa Isabel border.

The flag, like the Coat of Arms, was approved August 5, 1969. The flag of Coamo derives its colors from the Coat of Arms. The red is indicative of the martyrs and recalls San Blas who was beheaded. The yellow alludes to charity of San Blas and to the dry pastures of Coamo. The black refers to the bitterness and mourning undergone by Coamo.

The Coat of Arms is divided into four parts. The superior left and the inferior right have a red background with a gold Episcopal hat each. These parts of the Coat of Arms represent the old seat of San Blas de Illescas.

The horse and the bull represent the cattle wealth of the population. The gold color that serves as background in contrast with the black color, recalls the yellowish reddish tone of the fields of Coamo during the droughts.

The heavy border of the Coat Of Arms contains the following figures: two flames; three bell towers with gold bells outlined in red; two red crosses with arms ending in three petals; and a circle with a surface divided by horizontal blue and silver-plated stripes. The bell towers represent the three primitive churches of Coamo. The flames allude to the celebration of the Candelaria, the crosses allude to the Spanish colonizer Cristóbal de Illescas, and the circle represents a well for the Thermal Baths of Coamo. The crown has four towers.

How to get to Coamo from San Juan.