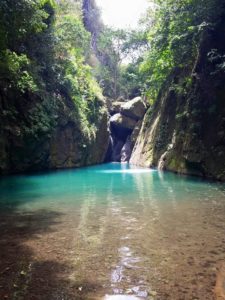 Barranquitas (bahr-rahn-KEE-tahs) is known as “the birthplace of founding fathers,” “the birthplace of craft fairs,” “the altar of the Nation,” and “Luis Muñoz Rivera’s town.” The name of the town comes from the clayey ditches cut into the earth by running water, gullies that are called barrancas, the diminutive of which is barranquitas.

The patron saint is Saint Anthony of Padua, whose feast is celebrated on June 13. Another important festival is the crafts fair, for Barranquitas is an important crafts center, particularly for religious carvings, utensils, and musical instruments.

Barranquitas is located in the eastern humid mountain region of the Central Mountain range. It is bordered on the north by Corozal and Naranjito, on the south by Coamo and Aibonito, on the east by Comerío and Cidra, and on the west by Orocovis. The topography is mountainous and steep.

The economy is based on coffee, tobacco, fruit, and ornamental plants. The town also has some clothing and shoe manufacturing. The climate is very attractive for tourism.

In the early 19th century there was no defined geographical location for the place that we know today as Barranquitas. Documents show that there were 30 settlers in the hills of Barranquitas, which belonged to the somewhat distant town of Coamo. It was due to this distance that the settlers wanted to have their own separate town and parish so that they could avoid the difficult hike to the neighboring churches for Catholic services.

Barranquitas only had a hermitage where there was no regular Mass, only special celebrations. Thus, Barranquitas was founded, as were many other municipalities, largely for religious reasons. This was the reason that in 1803, 72 residents petitioned the government for the founding of a new town. A year later, the petition was granted and, the town of Barranquitas was founded. By 1825 the municipality was fairly large, comprising Pueblo, Helechal, Palo Hincado, Barrancas, Quebradillas, Quebrada Grande, Honduras, Río Hondo, Comerío Alto, Comerío Bajo, and Orocovis wards.

That same year Orocovis ward separated from Barranquitas to join Barros ward from the municipality of Morovis to create the new town of Barros (now Orocovis). Comerío Alto, Comerío Bajo, and Río Hondo wards also separated a year later and joined up with Cidra and Bayamón wards to create the new partido or county of Sabana del Palmar (now Comerío). During the 19th century Helechal, Palo Hincado, Honduras, Quebrada Grande, Quebradillas, Barrancas, and Pueblo wards, as well as a new ward, Cañabón, probably a subdivision of Barrancas are shown belonging to the municipality. The town center had two streets with wooden houses, some of which had gardens.

In 1894, the economy was largely based on the harvests of 84 coffee farms, 52 produce farms, and 3 sugarcane plantations. Guano was mined to be used as fertilizer and there was some tobacco and produce farming.

During the first years of the XVI century (1508), it was necessary to unite the south of the island with the north with a route crossing the center of the island. At the beginning it was very difficult because only the trails used by the Taino Indians were available to make the trip. When the town of Coamo was founded, 32 kilometers from the southern coast, travel was made easier and finally the route made its way from Coamo through Barranquitas and Comerio to Bayamón at the northern coast. Due to the distance of the route, the Spanairds established a place to eat, rest and protect themselves against the inclemencies of the weather in what is known today as Barranquitas.

Barranquitas is located in the Central Mountain range of the Island. It borders north with Corozal and Naranjito, south with Coamo and Aibonito, west with Orocovis and east with Comerio.

Barranquitas is also known as: 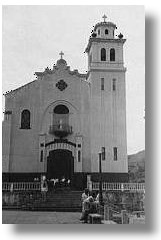 Mainly mountainous because of its location in the Central Mountain range. The Torrecilla hill (943 meters), Farallón (788 meters) hill and the San Cristóbal gorge form part of the topography.

How to get to Barranquitas from San Juan.