The Pearl of The Plata

Comerío (ko-me-REE-o) is known as “the Pearl of La Plata” and “the town of the guabaleros”, the latter referring to a kind of spider called guabá. It was first known as Sabana del Palmar because of the many royal palms that grew on a plantation called El Palmar, the site where the town was founded. The town patron is Holy Christ the Healer, honored in the festival held around the 6th of August.

The town is irrigated by the La Plata River and its tributaries the Hondo and Arroyata rivers. The La Plata River runs through the center of town and has been very influential in the development of Comerío, so much so that Comerío is known as La Perla del Plata (the pearl of La Plata). There are two small dams on the river known as Comerío Uno and Comerío Dos, the first of which was built in 1908 for the purpose of supplying electric power to the San Juan metropolitan area.

Traditionally the town economy has been based on coffee, tobacco, and produce. Comerío was famous worldwide for its production of tobacco. At the beginning of the 20th century there were three cigar factories that had been established by natives of Comerío: Cobián y Compañía; La Comerieña, owned by Sánchez and Compañía; and El Privilegio, owned by Santiago Umpierre y Compañía, the latter being the largest in terms of sales and employees. In 1901, cigars from Comerío were awarded a gold medal at an exposition in New York City.

Today the town has manufacturing plants that produce electrical and electronic devices, footwear, cigars, and furniture. Minerals have been found on Mount La Tiza including white clay, kaolin, alunite, pyrophilite, sericite, and silica. In 2003, the municipal government of Comerío received an award from the Environmental Protection Agency (EPA) for its recycling efforts.

Comerío was founded June 12, 1826. It was originally founded with the name Sabana del Palmar (Palm Savannah), because of the abundance of palms that existed in the area. From the beginning of the XIX century a desire existed between the neighbors of the districts of Bayamón, Cidra and Barranquitas, to become independent from their respective parties and to constitute a new municipality.

In June 1826, an official decree denominated the new municipality of Sabana del Palmar and which territories included the districts Comerío Alto, Comerío Bajo, Arroyato, Piña, Río Hondo, Sierra and Quebrada Prieta of the jurisdictions of Bayamón, Cidra and Barranquitas.

In 1894 the city council asked the Spanish Crown authorization for a name change, officially adopting “Comerío” as the new name. The name of Comerío derives from the name of the Indian Cacique Comerío who lived in the region.

In the 1854, according to an original document from the archives of the Departamento de Obras Públicas, Sabana del Palmar, was subdivided by the Vega Redonda, Cejas, Naranjo, Cedrito, Doña Elena, Palomas, Rió Hondo and Piña districts. At the time of the foundation of the town, the population consisted of 510 habitants, soon increasing to 3,000.

Located in the center-eastern region of island, it borders north with Naranjito and Bayamón, south with Cidra and Barranquitas, east with Aguas Buenas and Cidra, and west with Barranquitas.

Comerío is also known as: 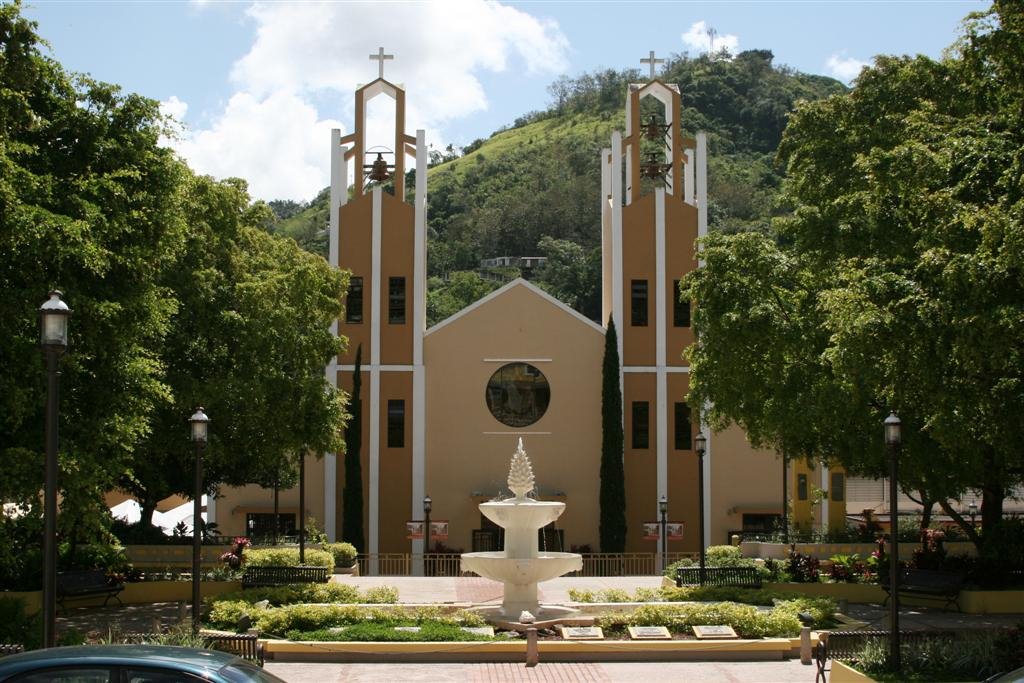 La Plata river and its affluents Hondo and Arroyata rivers. At the basin of the La Plata some kilometers to the north of the population of Comerío between the districts Doña Elena and Cedrito we find the Comerío Lake, with a height of 127 meters (418 feet) above sea level. Its original capacity is 600 acres/foot (740.000 cubic meters).

Quartered in cross, of green and white, and superimposed the right superior quarter is a anchored yellow cross. Being the flag an abstraction of the Coat of Arms, it gathers all its symbolism.

How to get to Comerío from San Juan.