City of the Eternal Spring

Cidra (SEE-drah) is known as the “town of eternal spring” because of its cool temperatures. Their patron saint festivities in the name of Nuestra Señora del Carmen are celebrated during the month of July.

This municipality, located in the east-central region of the island, borders the municipalities of Comerio and Aguas Buenas on the north and Cayey on the south, Aibonito lies to the west and Caguas to the east.

The municipality is located on a plateau surrounded by mountains and streams in the northeast part of the island. Because of its location in the mountainous region, Cidra enjoys a subtropical climate with moderate temperatures. The municipality’s terrain has been classified based on its slopes into categories of flat, semi-flat, moderate and steep.

Cidra is also known as the “town of the plain pigeon” because of the abundance of the endangered Puerto Rican plain pigeon (Columba inornata wetmorei), the only pigeon on the island that has blue eyes. This bird is larger than the common pigeon, has gray feathers and the wing coverts are edged in white. Its feet are reddish and its bill is black. It is often confused with the white-tipped dove, the white-winged dove and the zenaida dove.

Cidra was a district of Cayey until 1809, the year in which the inhabitants obtained the foundation of the municipality. It is not known with certainty who was the person who donated land, but there is data that indicates that an old proprietor of the locality yielded the land without demanding payment.

In the Mayorship there are no official documents on the matter because they were destroyed during hurricane San Ciriaco. Nevertheless it is thought that Mrs. Viviana Vázquez donated the land. Cidra has 36.3 miles square and is located in the humid mountains of the east. Its population is of approximately 42,753 inhabitants.

The word “cidra” does not have Indo-Antillean roots. Its origin is Latin and it is derived from the denomination “citrus” by which the lemon fruit is named. The “cidra” is a variety of this fruit.

No data exists that can explain the origin of the town’s name. There is the legend that the name was derived from the cultivation of “cidra” trees in what is known as the town today.

The town of Cidra is known as the Town Of The Eternal Spring, because of its fresh temperatures and its water. It is also known as the Town of the Savannah Dove (Columba inornata wetmorei), the only dove in the Island that has blue eyes and that nests in the Cidra area. This bird is larger than the common pigeon, has gray feathers and the wing coverts are edged in white. Its feet are reddish and its bill is black. It is often confused with the white-tipped dove, the white-winged dove and the zenaida dove.

The town of Cidra is located in the center-eastern region of the island. It is bordered by: Comerío and Aguas Buenas on the north, Cayey on the south, Aibonito on the west, and Caguas on the east.

Cidra is also known as: 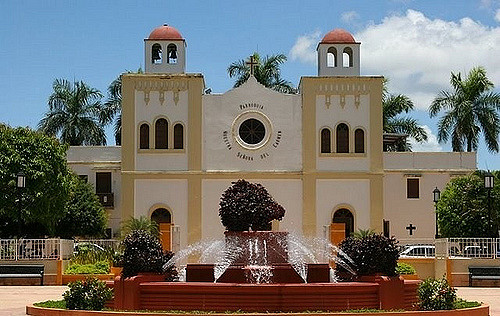 The terrian is between 200 and 700 meters (656 and 2,296 feet). The greater elevations appear in the districts Rabanal and Honduras. In Rabanal the Almirante y Viento Caliente hills are found (2,198 feet) and in Honduras the Plana y Gordo (2,165 feet) hills.The most level part is near the Cidra Dam.

EThe Plata river with its affluents: the Arroyata river, the Bayamón river and the Caña Bocana & Galindo ravines. Also the Cidra Lake, 3 sq km in diameter, which makes it the smallest of the island.

Under the Order No. 8, 1975-76 Series, the Municipal Assembly approved the project including the flag, Coat Of Arms and seal of the Municipality of Cidra on September 25, 1975. Professor J.J. Santa-Pinter’s professional services in heraldics were obtained through the Cultural Center. The flag is of regulation dimensions (3’x5′) [91.4 cm x 152 cm]. The Municipal Seal shines on the flag uniting all three stripes, and the whole is ended with yellow fringes. Each color has its own symbolism. The green evokes the landscape and its spring-like green colors throughout the year. This color covering the land together with the variety of colors of each flower make us known as the “City of the Eternal Spring”. The gold refers to the wealth of fruit and water, and also to the spiritual wealth of the region and city. The brown alludes to the Virgin Carmen, patron of the cidreños and to the savannah dove, a unique species in the world that has its habitat in this municipality.

Approved by Municipal Assembly during the decade of the seventies. The red band that crosses the shield diagonally represents the name of the municipality and symbolizes the patriotic love of the population and its daily struggle, as well as the martyrdom of San Juan Nepomuceno, one of the holy patrons of the municipality. Over the red band it has a gold “cidra” and a cornucopia with its fruit in natural color, which alludes that Cidra is one of the mayor producer of fruit of the Island.

In the superior right is placed a scapulary that evokes the Virgin Carmen, patron of the town, and a black bishop hat that alludes to San Juan Nepomuceno, bishop and martyr. In the left inferior part, on a blue bottom, is locatd a brown Savannah Dove which nests in the Cidra area. This dove flies over a mountain of three tips, which indicates the location of the municipality in the Central Mountain Range. The blue and silver waves symbolize the aquatic wealth of Cidra. All this is capped by a three-tower crown.

How to get to Cidra from San Juan.