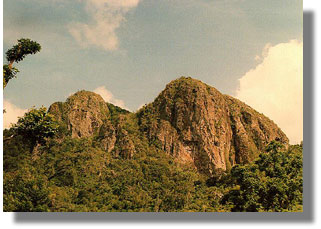 Cayey (kei-YAI) is known as the “Misty City,” the “City of Mount Torito,” and the “City of the Golden Coquí”. The patroness is Our Lady of the Assumption, whose festival is held in August.

Located in the mountainous region of Puerto Rico, Cayey faces the south coast. It is bordered on the north by Cidra and Caguas, on the south by Salinas and Guayama, on the east by Caguas, San Lorenzo, and Patillas, and on the west by Aibonito and Salinas.

There are many attractions in Cayey, including Guavate ward, where part of the Carite State Forest is located, as well as the “roast pork trail”. Many visitors flock to the roast pork stands and restaurants that serve local delicacies. Puerto Rican folk music and food create a certain magic in the area for visitors from around the island and abroad.

The Three Kings Recreational park is located on the same highway. Craft fairs, festivals, and poetry and musical events are held at the Park. The monument to the Three Kings was created by Juan Santos and sculptors Héctor León and Gladys Nieves. All along Route 184 there are fifteen sculptures created by this artist. The summer residence of the governors of Puerto Rico is located in the Jájome sector.

Besides its renowned elevations, Cayey is an important historic and cultural center. There is a campus of the University of Puerto Rico, several museums, and the Muñoz-Mendoza residence, where former governor Luis Muñoz Marín lived with his wife Inés Mendoza, when he retired from the governorship.

Cayey history goes back to an indigenous settlement called Toíta on the banks of the La Plata River. The name Cayey was recorded in writing for the first time in 1519 and has been variously spelled as Cahey, Cayei, Caiyey, and Calley. It is believed that this was the name of the chief, or cacique, of the region. In Spanish colonial times there was a small settlement in what was known as the Hato de Cayey, part of Coamo.

On July 2, 1773, settlers in the Toíta region petitioned Governor Miguel de Muesas for permission to found a town, which was granted on August 17, 1773, barely a month and a half later. The new town was called “Nuestra Señora de la Asunción de Cayey de Muesas.” In the early days of the town, there were seven dwellings and a wooden church. By 1787 a chapel and two sacristies had been built.

The economy was based on cattle farming, and in spite of the abundance of produce and trees, the inhabitants consumed barely enough to meet their needs.

In the early 19th century, the township of Cayey lost population, since the residents of Cidra seceded. However, several groups of immigrants came to the area at the time, from France, the Spanish provinces of Catalonia, Cantabria, and Galicia, and the Canary Islands. These immigrants married into criollo families who had settled in the valley. By the second half of the century, there was a flourishing coffee industry.

These new routes meant that the town had a strategic location in the 19th century communications network, which were crucial for Cayey’s development during the 20th century.

Cayey is located in the mountainous region, towards the southern coast. It is bordered by: Cidra and Caguas on the north, Salinas and Guayama on the south, Aibonito and Salinas on the west, and Caguas and San Lorenzo on the east.

Cayey is also known as:

The flag derives its design and colors from the Coat of Arms, which is in the center of the flag encirled by a solid black ring. The centered Coat of Arms and has four triangles pointing to it, two white and two red.

The Coat of Arms has a three tip mountain, a red bull, and a waving blue stripe representing the abundant water in the zone and also in reverence to the primitive Matron of the town of Cayey. The shield is topped with the silver lamb symbol of San Juan of Puerto Rico, and a red book.

The colors red and gold symbolize the Spanish tradition and it’s founder. The green color represents the landscapes and Cayey mountains. The black color indicates antiquity, solemnity and seriousness. The shield is a creation by Dr. J.J. Santa Pinter, associated professor of the Colegio Universitario de Cayey.

How to get to Cayey from San Juan.