Guayama (gwah-YAH-mah) is known as the “Town of the Witches” and the “City of the Guamaní.” The patron saint of Guayama is Saint Anthony of Padua.

Guayama is bordered on the north by the municipality of Cayey, on the east by Patillas and Arroyo, on the south by the Caribbean Sea, and on the west by Salinas. Although it is part of the southern coastal plain, the Jájome range 2,395 feet high and Cayey range rise to the north of the municipality.

The highest points in Guayama are Cerro de la Tabla and Cerro Tumbado, which are part of the Cayey mountain range mentioned above. Other peaks in the municipality are Garau, Charcas and Peña Hendida.

By the middle of the 20th century, Guayama had achieved significant industrial development, including the arrival of the Univis Optical Corp., the Angela Manufacturing Company and the establishment of a petrochemical complex by the Philips Petroleum Company. In 1968, that company began production of paraffin, benzene, synthetic fibers, anhydrous plastic, a million gallons of gasoline daily and many other products.

In that same decade, a thermoelectric plant was built in Las Mareas sector. From that time, agriculture declined as a result of land lost to industrialization and the construction of urbanizations. The urban growth impacted the planting of sugar cane. As a result, 155,595 tones of cane were harvested in 1974, producing 12,655 tons of sugar.

Matías de Abadía founded Guayama in 1736. Its name is of Taino origin and derived from the region where Cacique Guanamí and Cacique Guayama lived, guayama means “great site”. The town is known as El Pueblo de los Brujos (Town of Wizards) in honor of “Moncho el Brujo” (Moncho the Wizard), a legendary baseball pitcher from Guayama.

The development continued with the construction of the town cemetery in 1844, the slaughterhouse and meat market in 1851, and a wooden theater of two levels in 1878. By then Guayama had fourteen sugar plantations operating with steam engines and three with ox mills.

In 1881, Guayama is declared a Villa (First Order Municipality).

Located in the southern coast, its bordered by: Cayey to the north, the Caribbean Sea to the south, Salinas to the west, and Patillas and Arroyo to the east.

Guayama is also known as: 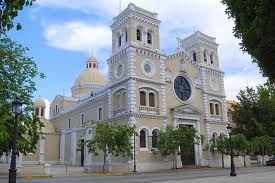 The hydrography is formed by the Plata, Chiquito, Guamaní and Seco rivers, and the Palmas Bajas, Culebra, Barros, Cimarrona, Salada, Corazón and Branderí gorges. The hydrographic system also includes the Carite Dam, Lake Melania and Las Mareas Lagoon near the coast.

Annual precipitation is around 51.95 inches and its average temperature is 81°F.

The Guayama flag is made up of three stripes of different colors. To the left of the top stripe we can see the Old Mill, which today is known as the Molino de Vives. Meaning of the colors:

The shield is divided in four parts and in two of them part of a chessboard appears. This makes reference to the square and regular form of the Guayama urban zone. It has two old mill towers. These symbolize the sugar cane culture. They also represent the characteristic elements of the landscape and history of the town.

The laurel trees constitute a representation of the beautiful Recreation Plaza very well known for its trimmed trees. The three silver flowers symbolize San Antonio de Padua, patron of Guayama. The crown represents Cacique Guayama, name of the town. The branches with guava fruits surrounding the shield symbolize a legend related to the origins of the town: the appearance of San Antonio de Padua floating over a guava tree. The big crown has four towers that represent the municipal autonomy and the unity of the citizens in the defense of their historical traditions and common well-being. The crown means that Guayama obtained the title of Village.

How to get to Guayama from San Juan.