Caguas (KAH-gwahs) is known as the “City of the Turabo” because it is spread out along the Turabo River valley. The city is also known as “the criollo city” or “the heart of Boriquén”. The festivities are celebrated near December 24 in honor of the Sweet Name of Jesus.

The municipality is located in the central eastern part of the island in the geographical subregion called the Caguas or the Turabo River valley. It is bordered on the north by San Juan and Trujillo Alto; on the south by Cayey and San Lorenzo; on the east by Gurabo and San Lorenzo; and on the west by Aguas Buenas, Cidra and Cayey.

The climate is a humid tropical climate, although there is less rain than in the eastern coastal valleys. The land, however, is fertile and deep.

Today Caguas is a major industrial and commercial center with more that 40 factories where plastic, clothing, leather goods, tobacco products, cameras, electronics, and other articles are manufactured. The city also is a tourist and ecological center, notably having inaugurated a botanical and cultural garden, part of the revitalization program for the traditional town center, where there are several sites and museums of interest for visitors.

Originally known as San Sebastián del Piñal de Caguax. The name is derived from the Indian Chief Caguax, a legendary Indian chief who reigned in these lands during the decline of the Taino civilization and faced the Spanish conquerors with brave resistance. Soon after he turned to Christianity.

Caguas was founded in 1775. In 1820 it received the title of Villa and in 1894 the title of City. Once Caguas became a municipality, housing improved and the streets were widened.

Caguas is also known as: 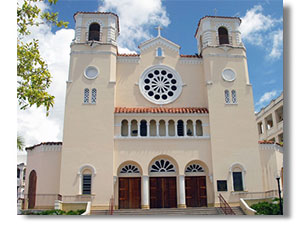 Its territory extends thru the Valley of Caguas or El Turabo, between the Sierra de Cayey and ramparts of the Central Mountain Range (Cordillera Central). The highest elevations are the Lucero at 2,887 feet, Alto de la Mesa at 1,210 feet, and the Los Altos de San Luis at 886 feet.

The economic activities of the city include: diamond cutting, tobacco, manufacture of leather products, crystal and plastic, electronic equipment and clothing.

The flag was adopted in 1960. The colors are blue and yellow. The cross stands for the Cross of San Sebastián, for this was the first Christian village that settled in the Caguas Valley together with the hermitage of San Sebastián del Barrero.

Caguas is the first Municipality to have an official flag for ten of its “Barrios” or rural communities. The flag was designed following the same blueprint as the city flag, but white instead of dark blue. The Bairoa Coat of Arms replaces Caguas Coat of Arms. It reads: “Bairoa, Clear River Water, 1842”.

This flag was with its original white field. It was recently changed to light peach. The shield was designed by Wilma Román Torres based on the history of the Bairoa sector. The symbols and their meanings are as follows:

The flag was designed by the student Armando Sosa Flores and its background color is “blue flower”, a kind of very light blue. Its simple symbology is as follows:

The flag was designed by the student Carlos E. Acevedo Rivera and its background color is light peach. Its symbology is as follows: Forming a circle, the symbols that stand for the historic come about of Canabón barrio appear in the center of the shield. A small Caguas city shield (crossed arrows with pineapples) appears over the main circle.

The flag was designed by Norma I. Villafane Semidey and its background color is “buff”, a kind of yellow cream color. Its symbology is described as follows:

The flag was designed by Lydia Milano Albino and its background color is light peach. Its symbology is as follows:

The flag was designed by the student Katerina B. Torres Figueroa and its background color is “blue flower”, a kind of very light blue. Its symbology is very simple:

The flag was designed by the student Milaniza Montalvo García and its background color is light peach. Its symbology is as follows:

This is the flag of the rural community or “barrio” of Tomás de Castro, Caguas, Puerto Rico. This was the second community to have its own official flag after Bairoa.

This is the new official flag of Barrio Turabo, Caguas, Puerto Rico approved by the Assembly and the Municipality of Caguas. The background color of the flag is a ligth blue with the original Turabo flag centered in a shield over crossed with the Taino’s arrows, same as the Caguas flag.

Description: The orange color of the first triangle on the flag represents the “clay” of the valley of Turabo in Caguas, Puerto Rico and symbolizes the original name of the first settlement “San Sebasti’an del Barrero”

The colors blue and gold were chosen for the shield, distinctive of the city of Caguas. The figures symbolize the Indigenous and Christian origins of this city. The crown represents Chief Caguax, Monarch of the Turabo Valley, upon the arrival of the Spanish conquerors. It symbolizes in addition, the Indian village host of the Chief whose name perpetuates the city.

The arrows, offensive arms of the indians, are arranged in vanes or cross of San Andrés remembering the conversion to Christianity of Chief Caguax. The population of Indians under the reign of Chief Caguax lived during the sixteenth century in the western margin of the Río Grande de Loíza and probably constituted the nucleus of the Dulce Nombre de Jesús del Piñal village, second Christian population of the Valley. San Sebastián, patron of the Hermitage del Barrero, is represented by the arrows that were the instruments of his martyrdom.

The pineapples symbolize the Dulce Nombre de Jesús del Piñal village, whose neighbors moved from the place that they occupied in the eastern margin of the Río Grande de Loíza, founding the “village” of Caguas in 1775. It was constituted as a town in 1779, a named village in 1820, and given the title of city in 1894.

How to get to Caguas from San Juan.