The municipality is located on the northern coast of the island is bounded by the San Juan bay and the town of Cataño to the north, Aguas Buenas to the south, Bayamón to the west, and San Juan to the east. Its territory lies within Puerto Rico’s northern coastal plain.

There are several hills in the southern part of the municipality. A smaller but noteworthy hill named Caneja, in the northern barrio of Pueblo Viejo. Within this hill is a cave which is known for its five entrances and its large, well lit interior. This town is also part of Puerto Rico’s Northern Karst zone.

This municipality’s economy is primarily industrial and commercial. Some of its factories process dairy products and foods from wheat and other grains, while others manufacture textiles and metal, paper, and chemical products. The service industry and construction are other important sectors within the economy of Guaynabo.

Guaynabo was founded in 1769, after its founders went through much turmoil battling to separate themselves from Bayamón because they had the approval since December 14, 1764, to found their town. Previously the city of Guaynabo was known as Buinabo. The Taíno name of Guaynabo means “Here is another fresh water place”, meaning, that the origin of Guaynabo is Indian-Antillean. Cacique Mabó ruled the Guaynabo region.

The process of colonization began in 1508, Juan Ponce de León – appointed the following year Captain General of Land and Sea Island and Governor in 1510 founded Caparra, the first Spanish settlement on the island, located in the north of what was currently it is the municipality of Guaynabo.

Located in the northern coast, it is bordereded by: Cataño and the San Juan Bay to the north, Aguas Buenas to the south, Bayamón to the west, and San Juan to the east.

Guaynabo is also known as: 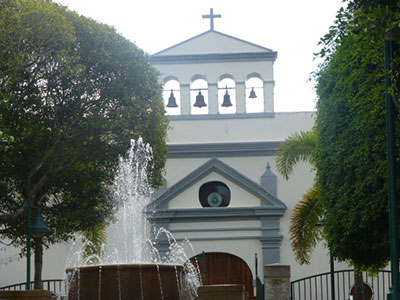 To the south it contains smooth hills, the rest of its territory is characteristic of the Northern Coastal Plain.

The Bayamón and the Guaynabo rivers. The Guaynabo, being the greatest tributary of the Bayamón, rises in Mamey, a ward of Guaynabo.

The flag of the municipality of Guaynabo is divided vertically in two equal parts by a crenellated line of six green battlements and five white ones. The half of the flag that is next to the hoist is green and the other half is white. On the green part appears the same cross, which except in this case is white and black, as that of the shield.

For five years the Instituto de Cultura Puertorriqueña and the Cámara Junior de Guaynabo were detailing the design of the first drafts for the Coat Of Arms, the Flag and Official Seal of the City. In a resolution by the Municipal Assembly these symbols were approved officially July 11, 1972.

It has a green background. In its superior half there is a cross that is divided by a vertical line, another horizontal and two diagonals, with silver and black colors alternating. The inferior (lower) part of shield contains a fortress crowned with battlements. The fortress has over its door a small shield with the drawing of a purple lion rising up on its back legs. The cross is the standard of the Order of Preachers of Santo Domingo, and represents San Pedro Martyr of Verona, patron of the town. Above the shield is a crown formed by walls and towers.

How to get to Guaynabo from San Juan.