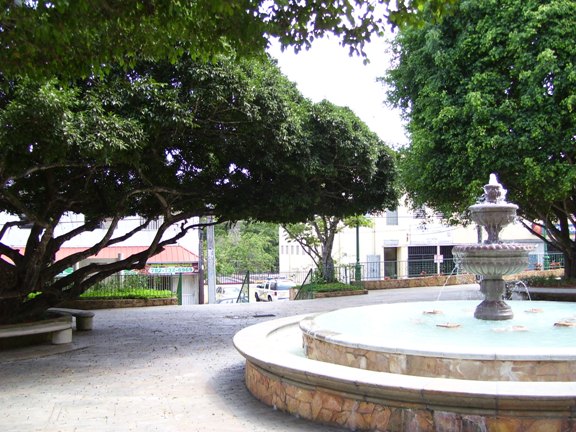 Aguas Buenas is known as the “City of Clear Waters” and the “Oasis of Puerto Rico”. The patron saint festival, in honor of Our Lady of Monserrate, is held in early September.

This municipality is located in the center of the island and is part of the region known as the eastern humid mountains. It is about 259 meters above sea level.

Aguas Buenas is bordered on the north by Bayamón, Guaynabo and Río Piedras; on the south by Cidra; to the east by Caguas and to the west by Comerío. The land is fertile, very appropriate for growing coffee and fruit.

Today, agriculture has diminished markedly. The economy is mainly based on certain industrial businesses and the service sector.

Aguas Buenas was originally a sector of the Municipality of Caguas, which was known as Aguabuena (Good Water). This territory had as assets springs of pure and crystalline waters. During 1798, a group of neighbors began to settle their homes near to one of these springs and decided to call to the sector Aguas Claras (Clear Waters).

The number of neighbors (residents of the zone) increased with the passing of years. On the 25th of July, 1832, the residents formed an assembly and commissioned Don Francisco de Salas Torres and Don Ramón Diaz to make the necessary arrangements to declare the Aguas Claras region a municipality. Don Julian López, one of the neighbors, had ten acres of land where the new municipality would be formed. There the plaza, the church, the house of the king would be constructed, which at the moment is known as the Municipal Mayorship and the priest’s house.

In 1834, during the government of Miguel de la Torre, the creation of a decree for the municipality was authorized. The 25th of May, 1838, the government of Don Miguel López de Baños passed a law forming the Aguas Claras region with its Aquasbonenses settlers into the Aguas Buenas Municipality. Don Francisco Salas Torres was the settlement’s first captain or mayor.

At the beginning the municipality had economic and administrative difficulties. Gradually the inhabitants developed an agricultural economy based on coffee and commerce. With these developments the Aguas Buenas population grew and had 7,000 inhabitants by the end of 19th century.

Today, agriculture has diminished markedly. The economy is mainly based on certain industrial businesses and the service sector.

The Aguas Buenas municipality is located on the eastern side of the Central Mountain Range (Cordillera Central) of Puerto Rico. It is bordered by: Bayamón, Guaynabo and San Juan to the north, Cidra and Caguas to the south, Caguas to the east, and Comerío to the west.

Aguas Buenas is also known as:

The territory is moderately mountainous being in the Mountain Range of Cayey (Sierra de Cayey), which is part of the Central Mountain Range. The highest peaks are La Peña, Santa Bárbara, La Tisa, and La Marquesa.

The Cañas, Bairoa, Cagüitas and Bayamón rivers form part of its hydrography.

Francisco Díaz Rivera designed the rectangular flag. A blue triangle with the base at the hoist has a solitary white star, like the national banner. Two additional triangles appear in yellow and green colors. These colors denote the agriculture and tropical flora, and the commercial and industrial development of Aguas Buenas.

The blue triangle represents the Puerto Rican nationality. When all these colors and triangles are united, they convey and manifest friendship, hospitality, cooperation, faith, and work of the people of this country; virtues and qualities that distinguish and honor us all.

In the shield we find history, traditions and culture, as well as the image of our possibility as a town that knows its origin and knows where it is headed in the preservation of these values. The shield shows us the Virgin of Monserrate at the top right side, a Taino Indian at the top left side, a symbol of the original inhabitants of this region.

At the bottom right side it has a cornucopia containing the native fruit of Aguas Buenas. In the left bottom side, there are four maracas and güicharo, typical instruments of the “jibaros” of Aguas Buenas and Puerto Rico. The crown consists of three towers.

How to get to Aguas Buenas from San Juan.