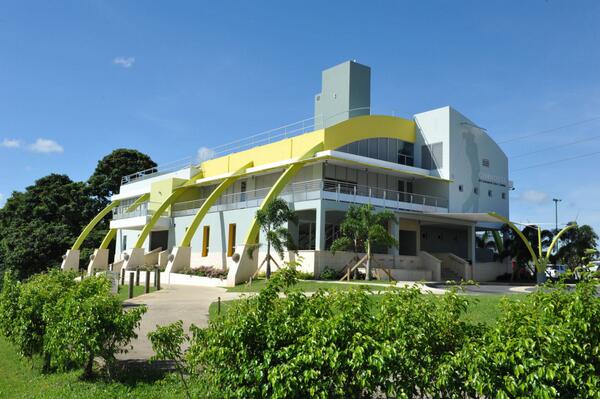 Bayamón (bah-yah-MON) is known as the “pork rind city”. The patron saint’s festival is dedicated to the Holy Cross, and it is held late in April and the beginning of May. The city’s economy is based on commerce and manufacturing.

The municipality is located in the north central area of Puerto Rico and is bordered on the north by Toa Baja and Cataño, on the south by Aguas Buenas and Comerío, to the east by Guaynabo and to the west by Naranjito, Toa Alta, and Toa Baja.

There are five rivers in the municipal territory: Bayamón, Minillas, La Plata, Cuesta Arriba, and Hondo.

Bayamón has won awards for its advanced environmental and community projects and policies. For example, the Environmental Protection Agency (EPA) recognized the municipality as a community with significant environmental achievements in Puerto Rico, which include an ecologically responsible golf course, established on a former landfill site. It is the only golf course in Puerto Rico that serves low-income communities as a priority.

Bayamón belonged to San Juan before being founded. A legend exists that its name is derived from a Indian chief called Bayamón, who dominated the region. Bayamón was founded in the year 1772, by don Mario A. Rodríguez León. Before Bayamón had streets, communication with San Juan was by river. One boarded a boat at the wharf, traveled through Palo Seco Bay to San Juan. Then one returned from San Juan through the channel of San Fernando, Cataño, and disembarked at the end of the Santa Ana Hacienda’s property. The first plans for the establishment of the town were drawn in 1791 by the military engineer, commander Don Ignacio Mascró y Homar. Bayamón rises into history as an organized town at the precise moment that Puerto Rico begins to have it’s own modern history.

During 1878, extensive changes took place with its municipal organization: the Ascencio district became part of Aguas Buenas and the district of Palo Seco became part of Toa Baja.

By 1912, the Guaraguao barrios, (Guaynabo), Pueblo Viejo, Santa Rosa y Sonadora, were taken away and annexed to form part of the Municipality of Guaynabo.

The municipality of Bayamón is located in hills of the northern central part of the island. It is bordered by: borders with Toa Baja and Cataño on the north, Comerio and Aguas Buenas on the south, Toa Baja, Toa Alta, and Naranjito on the west, and Guaynabo on the east.

Bayamón is also known as: 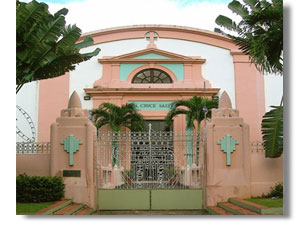 Because of its location in the Northern Coastal Valley, its territory is mainly flat. Nevertheless, the following hills can be mentioned: the 1,811 foot La Peña, and the 866 foot Vergaras hill.

The Bayamón river, which is one of the six longest of Puerto Rico, Hondo, Minillas, Bucarabones and Cuesta Arriba rivers.

On March 29, 1977, the Municipal Assembly of Bayamón officially approved the flag and corrected the errors which existed in the city code following Resolution No. 59 dated April 8, 1971.

The current flag of Bayamón, with a white field, official color of Bayamón, was embroidered by Mrs. Gloria M. León and maintains the design and colors of its Coat of Arms.

This shield is symbol and synthesis of the history and the values that distinguish the city of Bayamón. The main colors of the shield are blue and silver representing the waters of the Bayamón river and recalls that it was on these banks where the first hydraulic sugar cane refinery of Puerto Rico was established in 1549. The center contains the Holy Cross (Santa Cruz), patron of the first church of the municipality and the name of the old sugar cane refinery “Santa Cruz”, which was the historical origin of the town of Bayamón. The sugar cane flowers (guajanas) allude directly to the sugar cane industry that is of social and economic importance to the origin and development of Bayamón.

The five-tower crown, which is used for cities, was assigned to Bayamón as an exception for its extraordinary urban development, the magnitude of its population and for its religious dignity, which will possibly be raised to become Episcopal seat. The motto “IN HOC SIGNO VINCES” makes reference to Emperor Constantine when in the IV century had the vision in which the victory was promised to him if it accepted the Cross of Christianity as his banner.

How to get to Bayamón from San Juan.