The Town of the Samaritans 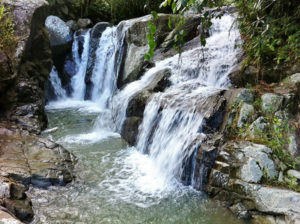 San Lorenzo (san lo-REN-zo) is known as the “Town of Samaritans” and the “Samaritan City”. The patron saints of the town are Nuestra Señora de las Mercedes and San Lorenzo, for whom the town is named.

San Lorenzo is located in the eastern part of Puerto Rico. It is bordered on the north by the municipality of Gurabo, on the east by Juncos and Las Piedras, on the west by Caguas and on the south by Patillas and Yabucoa.

This municipality is part of the geographic region called the Caguas interior valley, although in the southeast part there are some of the higher elevations of the Cayey range, which is part of the eastern humid mountains.

The economy of San Lorenzo, originally based on cattle ranching, included later on the cultivation of sugar cane, that was processed in a refinery moved by steam and five oxen which had two stills. In addition coffee and fruit were cultivated. The wood production, that was very rich, had already decayed by the immoderate exploitation of the forests. Today, the economy is mainly revolves around manufacturing. Clothing, leather shoes, and electronic equipment are produced there. In agriculture, raising livestock and growing fruit are also important economic activities.

San Lorenzo was founded by don Valeriano Muńoz de Oneca. The exact date is not certain because the parochial archives of this municipality were lost in a fire and no copies were available. Coll y Toste believes that it was in 1811 and other investigators such as Generoso Muńoz Morales indicates that it was founded between March of 1813 and April of 1814.

It is said that Gregorio Muńoz de Oneca donated forty acres of land. In the XVIII century the San Miguel de Hato Grande ranch was part of the original Hato Grande de los Delgado ranch, enormous extension of land granted by royal decree to a family, and was part of a ward of the an extensive valley which had as headquarters Caguas.

Documents state that as early as 1737 a hermitage was erected by the parish of Caguas, under the tutelage of San Miguel. The church was constructed in 1812, and during the date of the foundation of the town, 1811 or 1813, the original tutelage of San Miguel was changed to San Lorenzo. According to history it is said that this last saint appeared to several neighbors in the fertile valley of the river.

San Lorenzo is known as “”The Town of the Samaritans”” according to the following story; “During the 1920’s, in the Hato de San Lorenzo ward according to journalistic versions of the time and verbal testimonies of people who lived then: multitudes would go to a place in the mountains where a young 12 year old girl lived.

This young girl named Julia Vázquez Torres, according to versions, had supernatural powers that in repeated occasions provided health to needed people. During these undeniable feats only homemade remedies were applied with medicinal plants, minerals and the pure waters of a nearby well, where the young girl took care of the people. With time, the young girl became an adult, but her reputation as a upright person and dedicated to do good accompanied her every day by her life “.

Located in the eastern central region, it borders with Gurabo to the north, Patillas and Yabucoa to the south, Caguas and Cayey to the west and east with Juncos and Las Piedras.

San Lorenzo is also known as:

The Town of the Samaritans
Land of Leyends

It belongs to the geographic region of the Valley of Caguas and part of the Cayey Mountain Range.

This municipality is bathed by the Grande de Loíza, Emajagua, Cayaguás and Las Vegas rivers.

The flag of San Lorenzo is divided in four rectangles of equal size. The superior left and the inferior right are yellow. The superior right and inferior left are formed by horizontal stripes of equal width: two yellow and three red ones, alternated. This flag adopts the sytle of the Muńoz de Oneca’s Coat of Arms, lineage of the founder of this town, don Valeriano. This flag was adopted officially September 5, 1972.

The colors gold and red have been chosen for Coat of Arms of San Lorenzo, because they are the colors of the Muńoz lineage shield, from which Don Valeriano Muńoz de Oneca belonged to, founder of the town of San Miguel de Hato Grande, today San Lorenzo. The grill is the traditional symbol of San Lorenzo, deacon and martyr, patron of the town, because in a grill he underwent the martyrdom, slowly burned to death. The hill or mountain represent the Gregorio Hill, which dominates the San Lorenzo panorama. The cross is one of the heraldic attributes of San Miguel Arcángel, whose name was given to the town in the begining.

By: Raúl A. Torres Irizarry and Elpidio Montalvo

How to get to San Lorenzo from San Juan.