Las Piedras (lahs pee-AI-drahs) is known as the “City of Artisan” and its residents are called pedreños or pedrenses. The Virgin of the Immaculate Conception is the patron saint.

Geographically, it is part of the Cayey Range region. In the north are ridges that are part of the Luquillo Range.

The name Las Piedras refers to huge stones that were produced by a volcanic explosion in the area where the first houses in the settlement were built. Like Arecibo, Las Piedras is home to the “Indian Cave.” Preserved in this cavern are some of the petrogylphs carved by pre-Columbian inhabitants of the site.

The municipality’s economy was historically based on growing sugar cane, tobacco and fruit trees and raising livestock. Today, the main economic activity is manufacturing.

The municipality of Las Piedras was founded in 1801. The original population of Las Piedras was based on a hill along the shores of the Humacao River, during that time the area was covered by great boulders, the reason why it was baptized Ribera de Las Piedras (Stones/Boulder Shore). It was part of a ranch called “Hato Grande de los Delgados”, granted in 1626 by royal decree to Sebastián Delgado de Rivera, which covered an area that today is known as the municipalities of: Las Piedras; Caguas, Gurabo; parts of San Lorenzo, Juncos and Aguas Buenas. Legend has it that people called it “Ribera de Las Piedras” because of the boulders along the shore of the river where the town was established.

Las Piedras is located in the center of the Island, it is bordered by: Canóvanas and Río Grande to the north, Yabucoa to the south, Naguabo and Humacao to the east, and Juncos to the west.

Las Piedras is also known as:

The terrain of this municipality is mostly level. It belongs geographically to the region of Valleys of the Southeast. Nevertheless, it has spurs of the Luquillo Sierra range to the north and of the Cayey Sierra range to the south. In the Luquillo Sierra we find El Toro at 1,074 meters (3,523 feet) rising between: the wards of Guzmán, Arriba and Rio Grande; and the Las Piedras River. It is the highest point of this mountain range. The Cayey Sierra hills contain the Collores Hill at 369 meters (1,210 feet) in the Colores Ward; and the Asomante Hill at 270 meters (886 feet) in the Tejas Ward in the south.

This municipality gives birth to one of the main affluents of the Grande de Loíza River, the Gurabo River. The river originates in the El Río ward in the Luquillo Sierra range at an elevation of about 900 meters (2,953 feet). It is approximately 32 kilometers (20 miles) long. Its affluents are: the Honda Gorge in the Rábanos ward; Arenas and the Valenciano Rivers that have their origen in the Montones ward; and water from the Montones and Muertos Gorges. The Humacao River rises in the Montones ward, this one ends at the eastern coast or the Passage of Vieques. All the aforefore mentioned end at the Grande de Loíza River in the Atlantic Ocean.

The flag of Las Piedras is formed by three horizontal strips of equal width, the superior (top) white, green the center and blue the inferior (bottom) one. In the center in yellow color resides the Taíno sun of the shield.

In a silver field resides a blue monogram of the Holy Virgin, topped by a blue crown. Seven silver stones border the silver field and at the tip of the shield resides the Taíno sun in gold denominated as the “Sun of Las Piedras”. 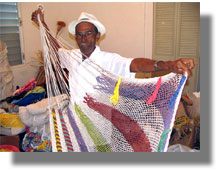 How to get to Las Piedras from San Juan.