Geographically, it is part of the Cayey Range region. In the north are the lower elevations of the Luquillo Range.

In 1782 the inhabitants of the Juncos area requested of the secular and ecclesiastical courts the transfer of the Parochial Church that was located in Las Piedras to the Juncos area. They asked to be allowed to organize a new town separate from Humacao. The request for the formation of the new town of Juncos was accepted by the government and on August 3, 1792 the temporary governor Don Francisco Torralba issued the order for the town to be founded. Don Tomás Pagán Gracia was named the first mayor of Juncos. By request of Don Tomás Pizarro (from neighboring Las Piedras) the new town of Juncos was erected on August 2, 1797. At the time it had a parish dedicated to Nuestra Señora de la Concepción, celebrating the first mass on September 8, 1797. Later the construction of streets and a public plaza took place.

According to history, in April of that same year, Puerto Rico was attacked by the English. Several residents of Juncos in addition to 323 citizens of Arecibo and Cayey defended San Juan from the foreign attacks.

Little by little they paved streets, built a cemetery and the population grew. By 1894 the population of students was already 589 boys and 593 girls. In 1898 the town underwent many changes. At the request of the United States all citizens that occupied positions for the Spanish Government could continue to work, and those that did not want to continue could resign. Immediately afterwards the mayor Francisco Escuté resigned. On October 1 of that same year a new mayor was named, Ricardo A. Martínez. All the rest of the city council resigned. Including Claudio Calenti, José Costa, Bartolomé Palou and Miguel Mújica because they were Spanish citizens. The residents were agreeable with the appointment of Mayor Martinez and on October 13 named Agustín Collazo as the municipal sindicate (town recorder and collector of fines) and Primitivo Delfaus as the municipal accountant.

In 1912 the “Arcelay Cinema” was constructed. Nowadays this restored historical monument exists thanks to Mayor Gilberto Conde Roman (1996) where today social and cultural activities are celebrated to benefit the town. The first library was named Rosa González Toledo. In 1924 the Asociación de Beneficios Mutuos was created.

Nowadays Juncos is credited with another historical creation, the modern library in honor of José M. Gallardo who was Secretary of Education. For many years this library, which before was a school, was a testament to education for the future of the town. Juncos throughout the years, has been improving as a city for the benefit of its people, forming customs and traditions paced with the times.

Juncos is also known as:

To the north it displays lower elevations of the Luquillo Mountain Range. On the northern border the terrain rises about 700 meters above sea level. In the southern end, in the Valenciano ward, we find smaller elevations of 500 meters.

On a gold field, undulating blue stripes reside in the lower half. These represent the Valenciano River. Centered between the field and above the undulating stripes appear the reeds as they appear in the shield: yellow, blue, green and red. A resolution to accept the flag was approved August 2, 1982, by the Municipal Assembly and by Acting President Hon. Ángel Rafael Boria Gómez and Temporary Mayor Hon. Gilberto Conde Román. 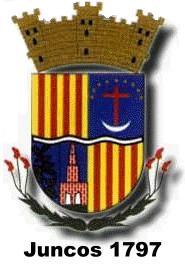 Divided into four quarters and presented to the viewpoint of the observer, the shield presents upper left and lower right vertical stripes gold (or yellow) and gules (red) in reference to the region of Valencia, Spain, and to its denomination as “Town of Valencia”.

This reference is linked directly to the foundation of the town: during the move in the seventeenth century of the Hato Grande de los Delgado (hato or hatillo means ranch), whose territory covered the northern plains of the Central Mountain Range in the banks of the Grande de Loíza river, a series of smaller ranches appeared. One of them was called Hato del Valenciano, which years later subdivided into the Hatillo de los Lirios and the Hatillo de los Juncos. This last one developed into the village and on August 2, 1797, receiving the title of town.

The other two quarter collect the symbols of the life and the apreciation of the town. The right upper quarter presents on blue background a new moon with twelve small silver stars, symbol of the Immaculate Conception of Mary, the matron of the population. It shows also the cross, symbol of the christendom of the town.

In the lower left quarter collects the symbols of the economic history of the region. On a dark blue background a tobacco plant appears in memory of the agricultural life of the community that for many years cultivated tobacco. To the right a chimney symbolizes greatly the industrialization of the zone by sugar cane processing that also gave life in the past to this town.

The upper and lower quarters are divided by an undulating white stripe with blue edges that honors the Valenciano River, so linked to the life of this town.

How to get to Juncos from San Juan.