City of The Cayenalisa Pineapple

Florida (flo-REE-dah) is known as the “Tierra del Río Encantado,” the “Tierra de los Mogotes,” and the “Pueblo de la Piña Cayenalisa”. [The Land of the Enchanted River, Karst Country, the Cayenalisa Pineapple Town]. Florida is the only municipality composed of one single barrio, Florida Adentro. Its patron saint is Nuestra Señora de la Merced [Our Lady of Mercy], whose festival is held during the last week of September.

Florida is located between the northern coast of the island and the Cordillera Central mountain range. The municipality lies north of Ciales, south of Barceloneta, east of Arecibo and west of Manatí. The town is part of the northern coastal plain and the northern karst zone.

Contrary to popular belief among Puerto Ricans, Florida is not the smallest municipality on the island. Comprising 39.4 square kilometers (15.2 mi2), Florida is larger than Cataño, which is, indeed, the smallest town in Puerto Rico.

Florida, the “baby of the family” among the municipalities in Puerto Rico, currently boasts an economy featuring the construction, retail sales, social services, and health care sectors. Major crops harvested by the agricultural sector include coffee and produce, particularly pineapples, plantains, and bananas. The manufacturing industry in Florida includes rubber and plastic products.

As a known ward, Florida goes back to the middle of the last century. It was known as Florida Afuera belonging to Manatí. Later it was annexed to Barceloneta.

In the 60’s the committee Pro Municipio 78 was constituted by the people who wanted to gain the victory of Florida. From this effort the Senate project “Senado 980” was created thanks to Lic. Juan Cancel Ríos.

In 1971 the governor Don Luis A. Ferré, had the honor and the satisfaction to approve the project and Florida was constituted as municipality.

Close to the nothern coast it borders north with Barceloneta and Manatí, south with Utuado and Ciales, west with Arecibo and east with Manatí and Ciales.

People are known as::

Florida is also known as: 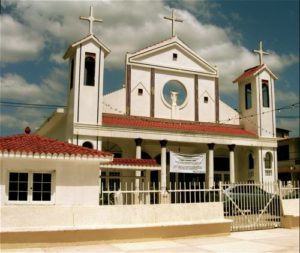 Limited to the north with Barceloneta, to the west with Arecibo, to the south with Ciales and to the east with Manati. The municipality belongs to the plains of the north and is surrounded by limestone or mogotes that protect it during the hurricanes. One of the highest hills is the Selgas zero, from which you can observe the entire town of Florida.

Its topography has a particular touch thanks to its mogotes and caves, typical of the north carso. One of its most known caves in Roman cave. It has three caverns inside and two of them pass a stream of water. Other caves are: Cueva Miró and Cueva Juana Gómez.

Florida’s flag derives its colors and symbolism from the Coat Of Arms. It consists of three horizontal stripes, with the following colors and widths: green the superior and white the inferior, with five modules of width each one, the center one red, with a width of one module.

Field of silver, in an abyss, a gules (red) anchored cross, between two branches of bloomed poinsettias (Poinsettia Pulcherrima). The Almeneda Campaign in green with a stripe forming waves, sabered, outlined in silver. At the top, a three tower gold crown. The shield can be surrounded, to its flanks and bottom by two crossed coffee tree branches with fruits, in a natural way.

The anchored cross is taken from the shield of the Llanes lineage’s last name that in its modified form is “Yanes”, which corresponds to the history and toponymy of the municipality of Florida but with its colors inverted, because in the family shield the cross is silver and its field is red. It remembers that the parish of Nuestra Señora de la Merced and San Juan Nepomuceno of Florida preceded in existence to the town of this name.

How to get to Florida from San Juan.