Manatí (mah-nah-TEE) is known as the “Athens of Puerto Rico,” an appellation that arose from the development of the town as a cultural center during the first decades of the 20th century.

Manatí is located on the north coast of Puerto Rico. Is bordered on the north by the Atlantic Ocean, on the south by Ciales and Morovis; on the east by Vega Baja; and on the west by Barceloneta and Florida.

The town is in the northern coastal plain and the karst area, the latter including may caves, haystack and sinkhole formations.

Manatí has many beaches, the most famous of which are Mar Chiquita and Los Tubos. There is a beach festival in July, and the festival in honor of the town’s patron saint, Our Lady of Candlemas, is held in February.

The principal industry of the town is pharmaceutical manufacturing. Other factories include electronics, electrical equipment, scientific instrumentation, footwear, and clothing. Manatí has fertile land irrigated by several aquifers, which has allowed for agricultural development, especially pineapples, coconuts, and other fruit. Other sectors of the economy include commerce, Manatí being the urban center of the North Central region, services, and tourism.

Manatí was officially founded by Don Pedro Menéndez Valdés in 1738. It was the ninth town in receiving the blessing of the Spanish Crown in Puerto Rico. The first Spanish town was established in Manatí by Juan Ponce of Leon attracted by the wealth of the valley and the promises of gold in the Manatuabón River. After constructing the first structures in the borders of the river and as a result of the violent swells of the waters, he left and founded Villa Caparra.

It is said that Manatí was baptized with this name because of the abundance of manatees in its waters. Others assure that the name has indigenous origin, derivative of the name of the river that the first inhabitants called Manatuabón River. As a result of its great cultural development during the first decades of the XX century it was baptized as “La Atenas De Puerto Rico” (Puerto Rico’s Athens). It is a fertile area bathed by springs, lagoons, beaches and the impressive and mighty Grande de Manatí River.

Manatees and dugongs ( trichechus manatus manatus ) are marine mammals of the order Sirenia. They originated in the middle Eocene period around 45 to 50 million years ago. They are gentle, plant-eating herbivores sometimes nicknamed “sea cows”. The name manatee comes from the Haitian word manati. Today, their closest living relatives are elephants [Proboscideans], hyraxes [Hyracoidea] and aardvarks [Tubulidentata]. Manatees are classified as [sub-]ungulates, even though they live in the water. Their thick-skinned, streamlined, almost hairless bodies have forelimbs modified into flippers. The tail is enlarged and horizontally-flattened.

Manatí became a city July, 1994 due to its economic and industrial development. Because of this fact the Coat Of Arms used by Manatí has a five-tower crown instead of three, characteristic of cities. Now Manatí is known as “Metropolitan City”.

It’s located in the northern coast, it borders north with the Atlantic Ocean, south with Morovis and Ciales, west with Florida and Barceloneta and east with Vega Baja.

Manatí is also known as:

Manatí is in the Northern Coastal Valley region and in the karst zone in which we find several caves, wooded hills and water holes.

It counts with the Grande de Manatí river that ends at the Atlantic Ocean with a length of 73 kilometers (45 miles) and the Tortuguero Lagoon.

Its annual precipitation is around 61.81 inches and its average temperature is 77.8°F.

The flag has the following description: a wide white stripe, a wide blue united by a smaller red one in the center. These colors are representative of Don Pedro Meléndez Valdés, founder of the municipality. 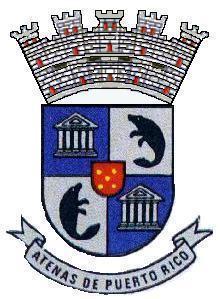 Shield divided in quarters: in the blue fields, a silver Greek temple, in the silver fields a black curved manatee and covering the four quarters in the center a small red shield with five flames in gold, forming a vane. To the top, a three tower silver crown and below the shield a white banner with the inscription “Puerto Rico’s Athens” in black letters. The Greek temple represents the city of Athens, whose characteristic building, the Parthenon was one of the main temples dedicated to goddess of wisdom Athens, to which, according to the legend, her name was given to the city.

How to get to Manatí from San Juan.