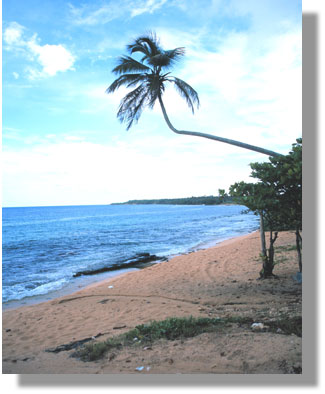 The municipality is located in the central part of the north coast of Puerto Rico. Is bordered on the north by the Atlantic Ocean, on the south by Morovis, on the west by Manatí and on the east by Vega Alta. It is located in the northern coastal plain and the karst zone. It is mainly flat, which explains the wealth of sugar cane plantations.

Some 40.2 percent of Vega Baja’s territory has been declared a nature preserve, which allows it to maintain its original state for the enjoyment of visitors. It includes six of the seven most important ecosystems in Puerto Rico: mangrove swamps, reefs, forests, caves, wetlands and estuaries.

Vega Baja also offers visitors a variety of recreational areas, because of its diverse natural resources. Its beaches and recreational areas, such as Puerto Nuevo, Tortuguero and El Trece, make it appropriate for the development of eco-tourism. Beaches are another attraction in the town, as are its springs Ojo de Agua, Charco Azul and Encantada.

Vega Baja is also known for its archaeological findings. A discovery that has been called the Indian Route was found in Vega Baja and shows evidence of the Ostionoid culture. According to archaeologists who have worked at the site, the discovery of the bodies of indigenous people buried in Vega Baja ranks as a finding of worldwide significance and is possibly the most complete study of prehistoric human remains in Puerto Rico.

One distinctive element of Vega Baja is the military museum, which is located in the Tortuguero area and preserves materials from World War II and the Korean War.

Many industries were established and slowly the agricultural population eminently became an industrialist. In the Cabo Caribe ward there’s a industrial zone established where many factories operate, dedicated in a large extent to the manufacture of electronic related products. Contributing to the economy and progress of the town are also: “Centros Comerciales” Las Vegas, Vega Baja Mall and other commerce located in the urban zone.

The territory occupied by Vega Baja today, has been inhabited for 2,358 years. The first inhabitants of the then called region of Cibuco were Indians. The Cibuco region was slowly populated by a rural society dedicated mainly to the raising of cattle. Vega Baja was founded according to the historians in 1776. Its first name was Vega-Baxa del Naranjal de Nuestra Señora del Rosario. Don Antonio Viera, Settler Captain, was the spokesman who formally asked for the recognition of Vega Baja as a town. Don Manuel Negrón Benítez donated 200 acres for the construction of the town was. The first elections under the Spanish dominion were celebrated in Vega Baja the September 9, 1812.

During the XIX century agriculture had a great development, specially in the cultivation of sugar cane. This brought as consequence an increase in the number of slaves. In the 1848 there was a slave revolt in Vega Baja, due to the cruel treatment they received from their masters. The movement failed and in order to teach them a lesson the mulato Miguel was shot, because he was considered the leader of the so called “revolt of slaves”.

In 1862 Vega Baja was classified as a town of first class in the civil aspect. At the beginning of the XX century, agriculture continued being the main occupation of the Vegabajeños. The San Vicente Sugar Refinery offered employment to several people while others made their living in the cultivation of sugar cane and fruits. When the San Vicente Sugar Refinery ceased operations in 1968 it was necessary to look for new sources of employment for the residents of Vega Baja.

It is located in the center of the northern coast. To the north it borders with the Atlantic Ocean, south with Morovis, west with Manatí and east Vega Alta.

Vega Baja is also known as:

Predominantly level, due to its location in Northern Coastal Valley. It also belongs to the karst zone thus displaying numerous wooded hills, caves and drains.

It is watered by the Cibuco, Indio, Unibón and Morovis rivers. The Tortuguero Lagoon is located between the municipalities of Manatí and Vega Baja. It also counts with the Puerto Nuevo. In the Cabo Caribe ward is the Cibuco marsh.

Vega Baja’s flag consists of a yellow cloth, crossed by a green band. The colors yellow and green are the colors used traditionally in the town, during civic, sport and cultural activities. The band is relates to the fertile valley and the river.

The Vega Baja Coat of Arms has a v-shape green band, with overlapping roses in silver and three oranges tress, with fruits in gold. In the superior part a five tower crown, silverplated with black and green. All the elements of the primitive and present name of the town represented in the shield. The roses refer to the Virgin of the Rosary, matron of Vega Baja. The band refres to the fertile valley and the orange to the Naranjal (orange grove), the original name of the population.

The main colors of the shield; green and gold are used traditionally in civic, scholastic and sport activities. The crown five tower indicates that the town holds the rank of Villa by Royal Real Decree.

How to get to Vega Baja from San Juan..