Dorado (do-RAH-do) is known as the “cleanest town in Puerto Rico” and the “golden city”. The patron saint is Saint Anthony of Padua.

The town of Dorado is located on the north coast of Puerto Rico. It is bordered on the north by the Atlantic Ocean, on the south by Toa Alta, on the east by Toa Baja, and on the west by Vega Alta.

The hydrographic system of the town is comprised of the La Plata River (formerly called the Toa) and its tributaries, the Cocal, Nuevo and Lajas rivers. There are red, black, and white mangroves at the mouths of these rivers. The Mata Redonda lagoon and Punta Fraile marsh are located in Higuillar ward, very close to the coast.

Dorado’s economy is currently based on tourism and manufacturing. The town is famous for its lavish hotels, while pharmaceuticals and electric and electronic equipment are the main industrial products. There is still some agricultural activity including some produce farming as well as traditional cattle raising for meat and dairy products. Construction is also an important source of employment.

In 1831 Dorado was a ward of the municipality of Toa Baja. During several years, the ward grew forming its own population center. This center was called Pueblo Nuevo (New Town) to distinguish it from the old town, Toa Baja. Years later, the residents of the wards of Dorado, Iguillar, Mameya and other sectors belonging to Toa Baja made a request to the governor to establish Dorado as a independent municipality with the condition that the cost of construction of municipal projects be prorated.

In 1842, governor Santiago Méndez Vigo authorized the foundation of the town with the condition that the proposed projects and the territory be defined with the following wards: Dorado Pueblo, Iguillar, Maguayo, Mameya and Río Lajas.

Though the origin of the name of Dorado is not clearly known, several legends exist. The most accepted are: that the town was named in honor of a family from the town and the other is that it was named for its golden beaches.

During its early decades the economy of the recently founded town depended on sugar cane cultivation, cattle and the production of fruit. Roof tiles and bricks were manufactured and there were also several sugar cane refineries. Fishing was also a mean of subsistence.

During 1898, when Puerto Rico changed sovereignty under the Paris Peace Treaty, and under the Law for Consolidation of Certain Municipal Terms (1902), Dorado became again part of the municipality of Toa Baja. Later, a legislative law made it possible for Dorado to recover its independent municipality with its original wards and borders.

It is bordered by: the Atlantic Ocean on the north, Toa Alta on the south, Vega Alta on the west, and Toa Baja on the east.

Dorado is also known as: 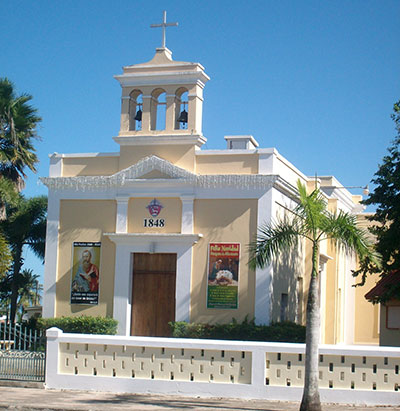 Belonging to the region of the Northern Coastal Valleys, most of its terrain is level and less than 328 feet above sea level. The wooded hills of the region are the main characteristic of the Dorado landscape. There are elevations in the south that reach 656 feet and in the north where the hills only reach 262 feet of altitude.

La Plata River and its affluents: the Cocal, Nuevo and Lajas rivers. It also has near the coast, in the Higuillar ward, the Mata Redonda lagoon and the Punta Fraile marsh.

The flag is composed of three stripes of equal width: the upper and lower stripes are golden, and the center one is brown. A brown, equal-sided triangle is placed with its base at the hoist. The golden stripes symbolize the town’s name, Dorado or “golden”. The brown stripe stands for Dorado’s Patron Saint, Saint Anthony of Padua.

Dorado’s Coat Of Arms was officially adopted March 27, 1978, and its colors are gold, silver and brown. The crown is gold with brown windows. The three towers mean that Dorado is a town, a properly constituted municipality. Underneath the crown, we can observe five disks that form a “T”, which is called Tau.

This “T” represents San Antonio de Padua, which is associated with the iris or lily flowers. The disks are brown and the lily flowers are silver, they represent the majestic La Plata River, which borders the town of Dorado to the east. The gold background of the Coat Of Arms denominates in a heraldic way the Talking Souls of the town. For example, in this case, the gold represents the name of the town; it is relative to the Patron San Antonio de Padua, whose veil is brown.

How to get to Dorado from San Juan.