Ceiba (sai-EE-bah) and its residents are known as “soup eaters” and the “Marlins” and the town is known as the “Marlin City.” The patron saint is San Antonio de Padua.

Topographically, Ceiba is part of the region known as the eastern coastal valleys. Its soil, mostly alluvial, was formed by the materials washed down from the mountains by water. It has fertile land on the plains and stony soil in the higher elevations.

Ceiba has several manufacturing businesses, most of which are dedicated to manufacturing clothing. The Roosevelt Roads naval base was an important factor in the business development of the municipality during the 60 years it was in operation. In the previous century, rice, tobacco and sugar cane were grown in Ceiba, and fruits are still cultivated. There was also iron mining in the past. In substitution of sugar cane, the Puerto Rico Land Authority implemented programs for farming minor fruits and domestic livestock, including beef and dairy cattle, as well as swine.

Ceiba it’s admired because of its powerful architectural grayish trunk, which has thorns. Its roots can extend for miles. There was the belief that at some time there was a forest of these trees and for that reason the town was named after them.

Though Ceiba is also known as the town of the Soup Eaters (Come Sopas), there is no official reason why the Ceibeños are so called.

The town of Ceiba was part of the Fajardo district until the May 12, 1838. To separate themselves from Fajardo, a local group of the population wrote to the governor. Although they had some opposition, they finally obtained their separation in 1838.

Ceiba served as home to the U.S. Naval base Roosevelt Roads. President Franklin Delano Roosevelt ordered the construction of the facility in 1940 and it was finished in 1943. It served as a training base for Navy ships and aircraft since World War II.

Ceiba is also known as: 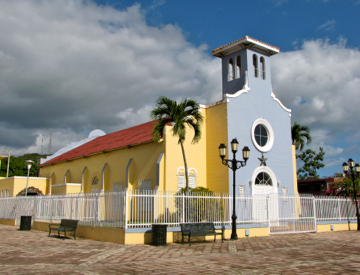 Due to its location in the Eastern Coastal Plains it displays few topographic changes. Its very irregular coasts form the areas of Ensenada Honda and Medio Mundo. It also has several keys and small barren islands. The Luquillo Mountain Range crosses it, two of the higher elevations are Pico del Este and Pico del Oeste mountains.

The Fajardo, Demajaguas, Daguao rivers and the Aguas Claras and Secas ravines, among others.

The average annual precipitation is 1.312 mm and the annual average temperature is 26.1° C. During the month of February the climate is dry. During May thru September there is a period of humidity.

The flag of Ceiba derives its design and colors from the municipal Coat of Arms and maintains the same symbolism. It consists of two vertical stripes of equal width, red immediate to the hoist, and green the second one. The first stripe has a superposed yellow cross.

In field of gold, one ceiba tree, a mural crown, at the head a cross in gold with lily flowers of the same metal. The shield is flanked by two sugar cane stems, with their leaves crossed at the bottom.

How to get to Ceiba from San Juan.