Fajardo (fah-HAHR-do) is known as the “Town of the Tough Faces,” because of how the residents fought off enemies during Spanish colonial times. Due to its location, it is also known as “The City of the Rising Sun” since it is the town on the main island of Puerto Rico where the sun first rises. The town is the transportation center between the main island of Puerto Rico and the island municipalities of Culebra and Vieques.

Fajardo is located on the far eastern tip, east coast of Puerto Rico. It is bordered by the Atlantic Ocean on the north and the east, by Ceiba on the south, and by Luquillo to the west. The highest elevations in its territory are located in the southwestern part of the municipality in Río Arriba wards, which are foothills of the Luquillo Ridge. Although at some points there are slightly higher elevations, the remainder of the territory is low-lying and flat, as are the municipalities that are located on the eastern coastal plains.

This municipality is a well-known tourist venue, because of its marinas, beaches, hotels, and natural resources. As well as being the location for the El Conquistador Hotel, Fajardo is known for the Cabezas de San Juan Natural Reserve. The Reserve comprises about 325 acres (331 cuerdas) located road 987, which runs from the town to Croabas. The area includes sea and coastal ecosystems, a rocky coast, beaches, a dry forest, mangroves, the Thalassia prairies, and a bioluminescent lagoon. There is a broad variety of trees, plants, and species such as the brown pelican and the sea turtle.

Another landmark is the lighthouse located at the Cabezas de San Juan Natural Reserve, which was part of the lighthouse system constructed by the Spanish government. Construction was begun in 1880, making it the second oldest on the island. The Fajardo Lighthouse was built in a classical revival style and has been in operation continuously since 1882. The lighthouse was restored in the early 1990s by the Puerto Rico Conservation Trust, the organization that owns the land where the lighthouse is located.

Fajardo is also the main travel center for the island municipalities of Vieques y Culebra. Access is also provided to other nearby islets and keys, such as Icacos, Palominos, Palominitos, and Diablo. The municipality has a small airport and a ferry terminal.

Today, Fajardo’s economy is based on manufacturing, including medical equipment and instruments, as well as the various offerings of the tourist industry.

Governor Bravo de Rivera founded the town in 1760. In 1772 it was named Santiago de Fajardo, it’s believed that Don Guozo Calderón was the founding governor of the town of Fajardo. The town of Fajardo had benefited much from the Power Law, by which several ports were opened to commerce, among them the Port of Fajardo.

In 1817 apparently three Venezuelan boats attacked the population, it is not known if the intentions were to occupy it or to resupply with food and water. In any case, they were rejected by the population. It was not until October 19, 1812, when the first city council was formed with the Mayor Don Manuel de Rivera that would direct the destinies of Fajardo.

In 1824 an incident took place in which a Commodore of the United States Navy was involved. Shortly after the mayor of Fajardo jailed a the Navy officer, Commodore Porter anchored in the port and threatened bombing the population if excuses were not given for the treatment of his subordinate. This was reason for Commodore Porter to be court marshaled.

The Fajardo economy traditionally had been oriented towards commerce through the port, and the cultivation of sugar cane and raising cattle. They did not lack in cultural activities and occupations. In 1882 Professor Sarroya had established a school; two years later the first Fajardo newspapers were founded, the Zumbador and La Voz de Oriente.

When the invasion from the United States took place in Puerto Rico, the Navy carried out a diversionary strike against Las Cabezas de San Juan Lighthouse. On August 1, 1898, they occupied the lighthouse. The population, by initiative of Dr. Veve Calzada, surrendered to avoid civilian losses.

In 1905 the foundation of the Fajardo Sugar Cane Refinery took place, the most important company to the local economy until it closed its doors in 1977.

Fajardo occupies the east end of Puerto Rico. It bordered by: the Atlantic Ocean to the north and east; by Ceiba to the south; and Luquillo to the west.

Fajardo is also known as: 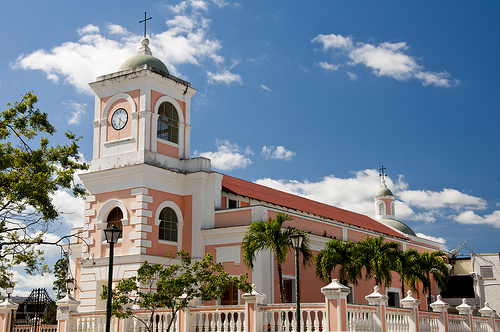 The most elevated parts of the territory are towards the southwest, in the Río Arriba ward, which is part of the Luquillo Sierra. The height fluctuates between 200 and 500 meters. The rest of the territory is level, as it corresponds to the municipalities located in the Eastern Coastal Plain.

Fajardo River and the Fajardo Gorge. The Fajardo River has as its affluents the Juan Diego Gorge, Aguas Buenas Gorge, and the Mata Redonda Gorge; it extends 24 kilometers (15 miles) and is born in the Río Abajo ward, municipality of Ceiba, at 800 meters elevation. Towards the extreme northwest of this municipality we find the Aguas Prietas and Grande lagoons.

It’s a tricolor triband. The upper one is gules (red), symbolizing the color of the shield’s border. Silver (white), the center one, standing for the color of the main pieces that appear in the shield and the crown. Azure (blue), the lower one, represents the color of the sky and the sea of Fajardo. Centered is the Coat of Arms of the village (villa) in natural colors.

The Coat of Arms is formed as a square with a rounded base and stamped at the top with a crown mural of three towers. It has for support, two dolphins and underneath the base a banner with the inscription “FAJARDO DE SANTIAGO”.

The blue represents the color of the sky and the sea of Puerto Rico. In a heraldic way the blue symbolizes the sapphire which stands for: justice, vigilance, recreation, fervor and loyalty of its citizens. The silver or white color symbolizes a pearl. It stands for: humility, innocence, happiness, purity, restraint, frankness, integrity, eloquence, fairness and victory (without shedding blood) from its enemies. The small sloop symbolizes the recreational navigation of the region. The seagulls in flight symbolize in marine heraldic: the providence, the aid and the prudence of being near to the coastal protection. The silver waves represent the waves of the sea. The border symbolizes protection and shelter of the villa.

The color gule (red) symbolizes the ruby and stands for: bravery, nobility, intrepidity, joy, victory, generosity and honor. The shells symbolize the ones used by Santiago Apostle, who was the patron of the villa in its beginnings. The shells are eight, and represent the eight wards of Fajardo that are: Sardinera, Cabezas, Quebrada Vuelta, Demajagua, Río Arriba, Naranjo, Florencio and Quebrada Fajardo, that form part of the jurisdiction of the municipality. The mesh that covers the border symbolizes the fish net that the fishermen of the area use for producing a product that abounds more in this coast of the Island. The supports are illustrated by gold dolphins symbolizing the control that the people of that region exert over the sea and its fishing wealth.

How to get to Fajardo from San Juan.