Isabela (ee-sah-BAI-lah) is known as “the garden of the northwest”, "los gaillos" (the young roosters) and “the town of quesitos de hoja” (traditional Puerto Rican white string cheese). The patron saint of Isabela is Saint Anthony of Padua.

The town of Isabela is in the northern coastal plains. It is bordered on the north by the Atlantic Ocean, on the south by the town of San Sebastián, on the east by Quebradillas, and on the west by Aguadilla and Moca. The southern region is rimmed by the Aymamón Mountains, which are an extension of the Jaicoa range.

Isabela’s present economy is based on tourism and high technology manufacturing industries. Cattle ranching and agriculture contribute moderately, most significantly in Jobos, where cassava root is grown. Fishing is the primary economic activity in the coastal region.

Chief Mabodomaca ruled the region where Isabela was founded. He was one of the most important chiefs of the Island. Although the actual date is not known, a settlement called San Antonio de la Tuna existed in this great extension of land that occupy today the municipalities of Isabela, Camuy and Quebradillas. Its center was at that time along the shoreline of the Guajataca River. Around 1725 Governor José Antonio de Mendizábal y Azares granted authorization to base a population on the settlement, which must have happened as it normally did after the foundation of a hermitage. In this case additional factors were the avocation of San Antonio and the construction of a small village. At the end of eighteenth century when the area was visited by Fray Iñigo Abbad y La Sierra, San Antonio de la Tuna had a church, more than sixty houses and almost 1,200 inhabitants, which was a considerable number for those times.

In the second decade of the nineteenth century, around 1818, the neighbors were supposedly stimulated by Bishop Mariano Rodríguez Olmedo to grant Pablo Corchado authorization to request from Governor Salvador Meléndez the transfer of the population to new site closer to the coast. The new site would be named Isabela in honor of Queen Isabel of Castile. Meléndez approved the transfer request and the new town was founded the following year May 21, 1819. In this same year the construction of the church began which finished sixteen years later.

The economy of San Antonio de la Tuna had been based on cattle ranching. After the transfer to the present Isabela, the cultivation of sugar cane, coffee, tobacco and fruits was stimulated. In 1918 the church was damaged during a strong earthquake that affected the western region of the island, it was rebuilt at a cost of $52,000.

It is bordered by: the Atlantic Ocean on the north; San Sebastián and Moca on the south, Aguadilla on the west, and Quebradillas on the east.

Isabela is also known as: 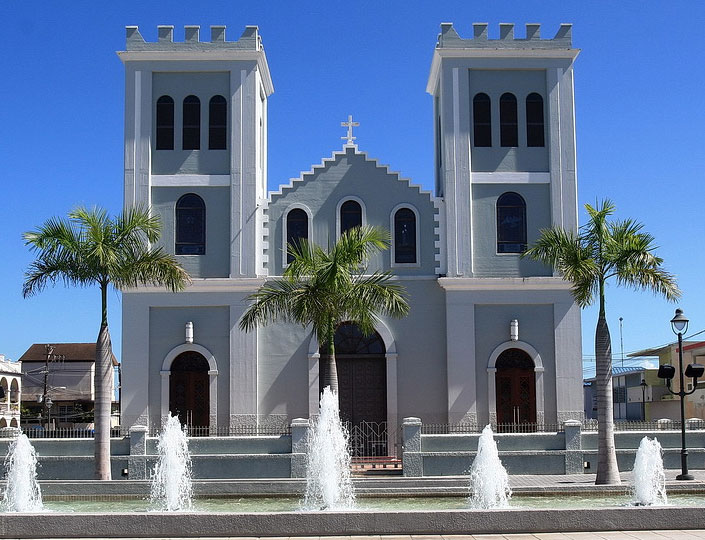 Geographically it belongs to the Northern Coastal Plains. The Aymamón Mountains run through the south, which are an prolongation of the Jaicoa Mountain Range that begins in Aguadilla. The hills that are part of these mountains are La Bandera (Galateo Alto ward)) at 368 meters (1,207 feet); La Silla (Arenales Alto ward) at 337 meters (1,106 feet); El Sombrero (in Galateo Alto) at 330 meters (1,083 feet); Indio (Planas ward)) at 310 meters (1,017 feet); and Monte Encantado (in Arenales Altos) at 280 meters (919 feet) of elevation above sea level. The central part of the territory does not surpass 200 meters (656 feet) of height; near the coast, it is below that height.

The Guajataca River borders the east separating it from Quebradillas; its affluent the Sequía Gorge intersects the river at the Coto and Llanadas wards. Los Cedros and Del Toro gorges empty directly into the ocean.

Annual precipitation is around 62.8 inches and its average temperature is 84.7°F.

Isabela's flag derives its design, colors and symbolism from its Coat of Arms. It consists of three horizontal stripes of equal width. The top and bottom stripe are yellow and the center one green. The Coat of Arms may be superposed on the green stripe in the center. The dimensions of the flag are the usual ones used in Puerto Rico.

In a way similar to the flag, the shield is divided horizontally in three stripes of the same width, two gold and one green. The top and bottom stripes are gold, and the green stripe in the center has an olive tree in its center. The green symbolizes the first inhabitants of Isabela and of all Puerto Rico, including the Igneris Indians that were established here during the nineteenth century.

The gold represents the Taíno Indians, who lived in this area about two hundred years before the discovery of our island. They made extensive use of gold. The gold bell represented in the center stripe between two cactus is symbol of the hermitage, today in ruins. It is also a symbol of the town of San Antonio de la Tuna, founded during the last third of the seventeenth century along the Guajataca River. It is the place of origin of the present Isabela.

How to get to Isabela from San Juan.