Rincón (ring-KON) is known as the “Town of the Beautiful Sunsets” and “Surfing Town,” its residents are called “The Surfers”. Its patron saint is Santa Rosa de Lima.

Rincón is visited by thousands of tourists each year. Since the celebration of the World Surfing Championship almost twenty years go, Rincón’s six beaches have turned into the winter mecca for people who practice surfing. Whales in danger of extinction can be observed in the area during the months of winter.

The municipality is part of the region called the western coastal valleys, which is uniformly flat. Its alluvial soil is very fertile, and rain is abundant from May to November and scarce from December to March. Rincón also has some ridges from the San Francisco mountain range.

Among the principal industries are tourism and manufacturing. Chemicals, electronic equipment, scientific instruments and clothing are produced in the municipality. In the past, livestock and sugar cane farming were the main economic activities. Today, the only agriculture is fruit.

Rincón was founded in 1770. It was known formerly as Santa Rosa de Rincón. It is said that the name comes from Don González Rincón that was owner of the land.

Rincón has been receiving visitors since 1770, although many believe that Columbus made a brief visit in 1493. The local legend mentions Pirate Cofresí and his hidden treasure, that could be still buried in the beaches and hills of the area. In fact, Spanish treasures have been found in the clear and swallow waters of Rincón.

Rincón is approximately 15 miles north of Mayagüez and 11 miles southwest of Aguadilla. It is bordered by the Atlantic Ocean to the north, south and west; and to the east with Ańasco and Aguada.

People are known as: Rinconeños

Rincón is also known as: 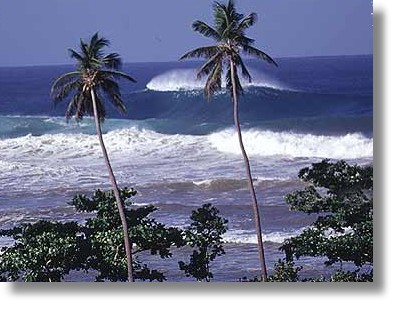 The municipality of Rincón constitutes the most prominent lands of the Western Coastal Valley region and of Puerto Rico. Its terrain is uniformly level, except for some small spurs of the San Francisco Mountains, found in the southeastern corner and in the Atalaya and Jaguey wards. The Atalaya hill with 362 meters (1,187 feet) is one of highest elevations of Rincón.

It is known for its agricultre, based on the cultivation of sugar cane and fruit. Cattle ranching and tourism are other source of income. It has several industries that manufacture chemical, electrical and electronic products, scientific instruments and clothing.

The shield consists of a green and orange Spanish blazon, with a yellow band inclined left to right. To the right and on a green background a cross, symbol of Christendom. To the left and on a orange background a Spanish ship, symbol of the discovery of Puerto Rico, in the coasts of Rincón. The orange color symbolizes vegetation and hope, and the yellow represents our Christendom. The banner has the inscription “Municipio de Rincón”.

How to get to Rincón from San Juan.