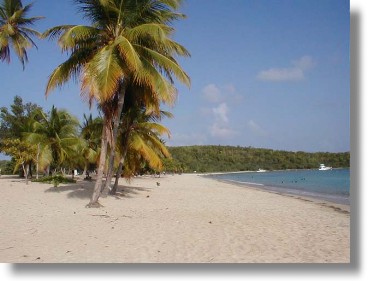 Vieques (vee-AI-kais), baptized the “Baby Island”, or “Little Girl Island”, by poet Luis Llorens Torres, is located 10 kilometers (6 miles) southeast of Puerto Rico. The patron saint festival is held in July in honor of the Virgen del Carmen, the patron saint of Vieques.

Vieques is currently in the process of reorienting its economy due to the transfer of lands formerly occupied by the United States Navy to the government of Puerto Rico in May of 2003.

Vieques is located 6 miles southeast of Puerto Rico, separated from the main island by the Vieques Passage. Off Vieques’ north coast is the Atlantic Ocean and to the south is the Caribbean Sea. The topography of the island includes hills, small valleys and coastal plains.

Economic activity in Vieques is based on construction, tourism, fishing, and jobs generated by the General Electric factory, which has been on the island for more than two decades. Among its tourism attractions are its beaches and bioluminescent bays.

Vieques, was discovered by Christopher Columbus in his second voyage. SInce 1938 according to a law formulated by the legislature, recognizes November 19th as the day of the discovery for both the “Baby Island” and the “Big Island”. A controversy between some historians exists who believe that Vieques was discovered 3 days (16th) before the Island of Puerto Rico, but it is officially celebrated the 19th as the Day of the Discovery.

The island municipality is located southeast of Puerto Rico between latitudes18.0 and 18.5 north and between longitude 65.34 and 65.16 west. The Atlantic Ocean surrounds it to north and south with the Caribbean Sea. It has an area of 33,088 acres (51.7 square miles) and measures 18 miles in length by 3.5 miles wide in its widest area.

Its average elevation is at sea level about 38 feet although it has some elevations with 400 feet above sea level. Its name, in Indian language means “small land” and it is said that “Bieque” was an Indian Chief. The certain thing is that it appeared for the first time in the maps in 1527 with the name of Vieques.

Officially, in 1843 the first town was founded, Isabel II in honor to the queen of Spanish. Soon with the impulse that produced the slave force, a series sugar refineries arose that still denominate some of wards of the island. They are Esperanza, Puerto Real, Playa Grande, La Arcadia and Resolución.

In the history and customs of the “Baby Island” three countries have left their roots. Spain bequeath the traditions and the language, England influenced with the colony that still exists and the profile of some of the structures reflects the French influence, names like Le Brum, Lanzó, Dubois, Motineau, Choisne, Monrepose confirm this fact.

Vieques has historical monuments that are visited by thousands of tourists every year:

Vieques is also known as:

Vieques’ terrain is level to a large extent. Its highest elevation is mount Pirata, towards the west, with 301 meters.

It consists of several lagoons.

The flag of Vieques consists of seven horizontal straight stripes of equal width, four white and three blue alternated. In the center it has a green rhombus, in yellow color, a simplified design of the castle. The representation of Naval Crown is omitted.

In a field of 10 waves, five silver-plated and five blue, a green rhombus with a gold castle outlined in black and red openings. To the top, a Naval crown in gold, with silver candles. The sea of Vieques is represented by the silver-plated and blue waves; the island, by the green rhombus; and the historical fort that dominates it, by the traditional Spanish heraldic castle. This castle, is also symbol of Spain, who took away the Island of Vieques from the Caribes, defended it from privateers of different nationalities, and later on, in the XIX century, incorporated the Island in a formal and definitive way, to Puerto Rico.

The gold color of the castle and the green of the rhombus, combined, have a special historical meaning. The main colors constitute the main colors of the shield of the Bolivars from Venezuela, proclaiming that this Island was the only Puerto Rican land that the liberator Simón Bolívar set foot on. Instead of the traditional crown, a Naval crown is adopted for the Coat of Arms of Vieques, to emphasize the insular nature of Vieques and to remember the glorious Naval encounters in its waters repelling the enemies of Spain and Puerto Rico.

How to get to Vieques from San Juan.